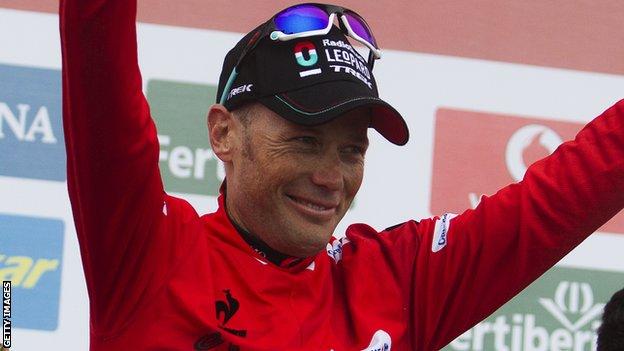 Chris Horner became the oldest ever Grand Tour winner with victory in the Vuelta a Espana at the age of 41.

The American is eight years older than Tony Rominger was when he won the race in 1994, and five years older than the Tour de France's most senior champion, Firmin Lambot, who triumphed in 1922.

The 22-year-old claimed victory in a bunch sprint in Madrid ahead of American Tyler Farrar and Nikias Arndt of Germany.

Along with the Tour de France, won this year by Britain's Chris Froome, and Giro d'Italia, the Vuelta is one of cycling's prestigious three-week Grand Tours and represents the biggest win of Horner's career.

"I knew how hard it was going to be for this team to win the Tour of Spain," he said.

"I have faced younger, great riders like Nibali, [Alejandro] Valverde and Joaquim Rodriguez. They have had a great tour so, for me, it is a legendary moment that may not be repeated.

"I know I am also the first North American to win the Tour of Spain and this makes me very proud of my work and, above all, that of my team-mates."

Horner made his first move on stage three, which he won to register his first stage victory in a Grand Tour and move ahead in the general classification.

He held the leader's red jersey for just a day as 2010 champion Nibali, riding for Astana, regained the lead, but returned to the head of the field with victory on the 10th stage.

Italian Nibali responded again and seemed set for his second Tour of Spain title as he headed into the final week of the race with a 50-second lead.

But Horner made significant inroads into his advantage on the 16th and 18th stages before finally moving ahead on Friday's 19th stage.

Horner moved 37 seconds ahead of Nibali by finishing second on the penultimate day at Alto de l'Angliru and maintained that lead on the final stage.

Nibali said: "I can't complain with how my year has gone. I won the Giro and I came here with the intention to win again in the Tour of Spain.

"I gave everything I had to wear the red jersey and defend it, but perhaps our strategy wasn't correct."

Spaniard Valverde, winner of the points race, finished third in the overall standings, with Ireland's Nicolas Roche in fifth. France's Nicolas Edet won the King of the Mountains classification, ahead of Horner.