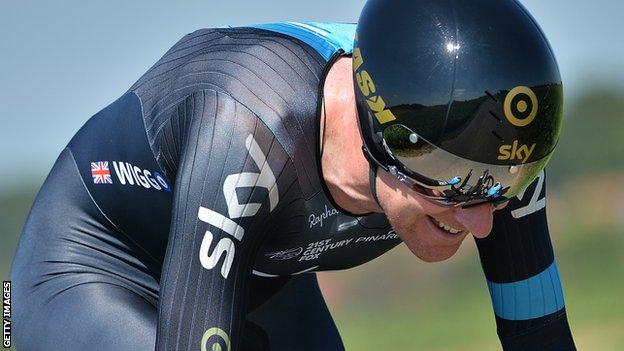 Sir Bradley Wiggins is favourite to win the 10th Tour of Britain, which begins in Peebles, Scotland on Sunday.

Wiggins was the main attraction at last year's event after victories in the Tour de France and Olympic time trial, but withdrew with a stomach bug.

The 33-year-old would be Team Sky's first winner of the race, which finishes on 22 September in London.

Mark Cavendish and Alex Dowsett are among the other Britons who will be hoping to secure stage victories.

But of the 114 riders representing 19 teams, most eyes will be on the race favourite as he prepares for the Road World Championships in Tuscany later this month.

And Stannard, who finished third in 2008, senses a "real enthusiasm" for cycling in Britain, especially after last year's Olympics and Chris Froome emulating countryman Wiggins by winning the Tour de France.

The 26-year-old said: "I'm really looking forward to competing again on British roads. We will race all over the world but it's always nice to compete in front of your home fans."

The eight-stage race will move through the Lake District, Snowdonia and Dartmoor before concluding with a 10-lap stage in the centre of London, which Omega Pharma Quick-Step sprinter Cavendish will target.

Cavendish, who has won 25 stages of the Tour de France, believes the Tour of Britain continues to grow in popularity and prestige.

The Manxman, 28, said: "I was just out training with two of my team mates. We went into Peebles and it was pretty crazy and I think that is exciting.

"Last year the crowds were unbelievable. Not just where we had the Olympics, but the whole week, even in the bad weather.

"That's testament not only to how big cycling has come in the country across all disciplines, but for the amount of times this race had been on and what's it become. The standard of the teams that come here is phenomenal."

Tour of Britain race director Mick Bennett added: "We are proud to have the best field ever assembled for our 10th anniversary of the Tour of Britain.