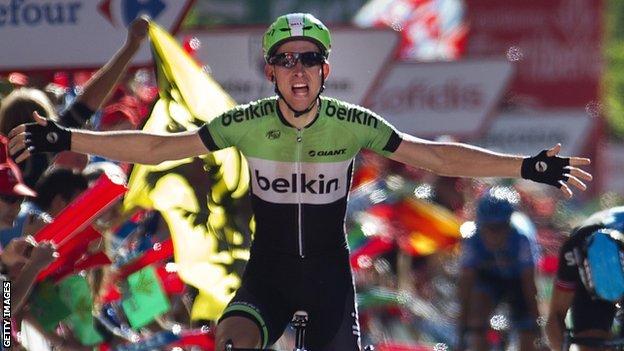 The time gaps between the top four in the general classification were unchanged, with Italy's Nibali leading American Chris Horner by 28 seconds.

Ireland's Nicolas Roche moved up from sixth to fifth place after finishing 10th in Wednesday's stage, but trails Nibali by three minutes and 43 seconds.

The Dutchman broke away from the pack only 500 metres from the finish line to see off his Norwegian rival.

"All day I was thinking about an attack in the last 1km because I knew, with the climb 8km from the finish, that the peloton was not going to be really big," Mollema said.

"In the last 1km I was suffering so much, but I was just thinking that this is my chance and I have to take it."

With the majority of the leading riders receiving the same time for the 189km (117 miles) stage from Calahorra to Burgos in northern Spain, Astana rider Nibali's 14th place was enough to retain his narrow advantage over RadioShack's Horner, who came 17th.

Further behind are Spanish pair Alejandro Valverde and Joaquin Rodriguez, who remain third and fourth.

With four stages left, the race continues on Thursday with Stage 18 - a gruelling 186.5km (116 miles) mountainous stage from Burgos to Pena Cabarga, before the race concludes in Madrid on Sunday.