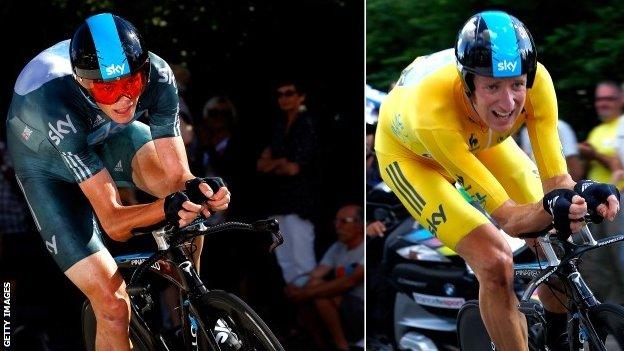 Froome, the 2013 Tour winner, will lead the men's elite road team while Wiggins is confirmed for the time trial, the event in which he won Olympic gold.

Junior world champion Lucy Garner and Lizzie Armitstead have been confirmed for the women's road race while Emma Pooley, a world champion in 2010, is set to ride in the time trial.

It is a mark of British cycling's strength that riders such as Peter Kennaugh and David Millar can be left off this list without causing alarm.

Any squad that contains Chris Froome, Geraint Thomas and Bradley Wiggins has a chance of repeating 2011's win. It was Mark Cavendish that day, but this course is too hilly for him.

Whether it is hilly enough for Froome is the big question. It is not just about the men, though: GB have medal chances all week.

Wiggins and sprinter Mark Cavendish have also been named on the list of 11 for the men's road race, which will be reduced to eight for the competition beginning on 22 September in Toscana, Italy.

It will be the first time Wiggins and Froome have competed together in the same team since the Tour of Oman in February.

British Cycling's performance manager Shane Sutton said: "I think the selection of the elite teams speak for themselves, we've got Olympic medallists, Tour de France winners and former world champions all in the mix and I think we could do well across the board there."

The final selection for the World Championships will be announced in due course.