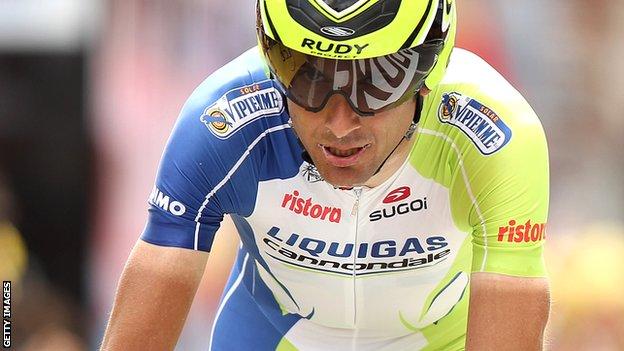 The Italian had been seventh overall heading into the 155.7km 14th stage from Baga to Andorra, which was hit by heavy rain and freezing temperatures.

Spaniard Luis Leon Sanchez also pulled out due to hypothermia.

Vincenzo Nibali extended his overall lead to 50 seconds and Ireland's Nicholas Roche dropped to sixth, as Daniele Ratto broke to win the stage.

The Italian, riding for the Cannondale team, led from start to finish and was part of an early five-man breakaway group, before taking to the front on his own with more than 40km to go.

Nibali attacked his main rivals on the final 7km ascent of the Collada de la Gallina, taking nearly a minute out of Spaniard Alejandro Valverde, who nearly fainted because of the cold on the descent of the Ordino, the second climb of four.

"It was inhuman, the hardest day I've ever had on the bike," said Valverde, who now trails by one minute and 42 seconds.

Nibali stayed with Chris Horner, whose Croatian team-mate Robert Kiserlovsk set a ferocious pace up the final climb, and then dropped him in the final metres to stretch his lead over the veteran American by another four seconds.

Roche, son of former Tour de France and Giro d'Italia winner Stephen, had been lying second overall but lost more than three-and-a-half minutes to leave him 4:06" behind Nibali overall.

"I haven't won yet, but this is an important step forward," said 2010 Vuelta champion Nibali, who also won this year's Giro d'Italia.

"Horner is very strong and I'll have to watch him, but we're weeding out the rivals and we've done a lot of damage overall."