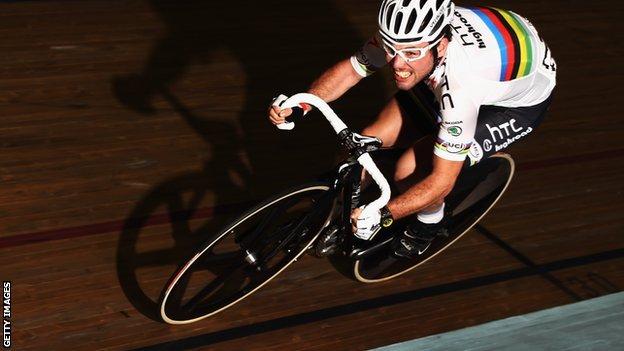 Britain's Mark Cavendish finished third in Saturday's madison as he continued his return to the track at the International Belgian Open.

The 28-year-old sprinter and team-mate Owain Doull claimed 12 points on their way to a podium spot in Gent.

On Friday, Cavendish was pipped to the finishing line as he took second in the 15km scratch event.

He is racing in Belgium to give himself a chance of competing on the track at the 2016 Rio Olympics.

Cavendish on the road

Cavendish won the 25th Tour de France stage of his career during this year's race, putting him level with Andre Leducq and behind only Eddy Merckx (34) and Bernard Hinault (28)

By riding in Gent, he has scored points that make him eligible to ride in a World Cup event. From there, he will attempt to secure a place at the World Championships and then the Olympics.

Rowsell was expected to miss the event after undergoing surgery following a crash during the RideLondon road race last month.

"Really pleased to win the pursuit here in Gent in my first race back," the 24-year-old tweeted.

Cavendish has not decided whether he will race on the track in Rio, but told Cycling Weekly: "At least doing this gives me the option.

"I'm not saying I'm doing anything. I might not do anything ever again on the track. But when I found out about the rule change [meaning riders must qualify for World Cup events], I thought I better do one in case I want to do the track."

Prior to three days' training at the Manchester Velodrome this week, Cavendish had not ridden on the track in more than a year and it is the first time he has represented Britain in the discipline since the 2009 World Championships in Poland.

"The scratch was primarily a bit of a warm-up for the madison," he said.

"I felt all right. Ignoring the result, I got what I wanted out of it."

Cavendish won the world madison titles in 2005, with Rob Hayles, and 2008, with Sir Bradley Wiggins.