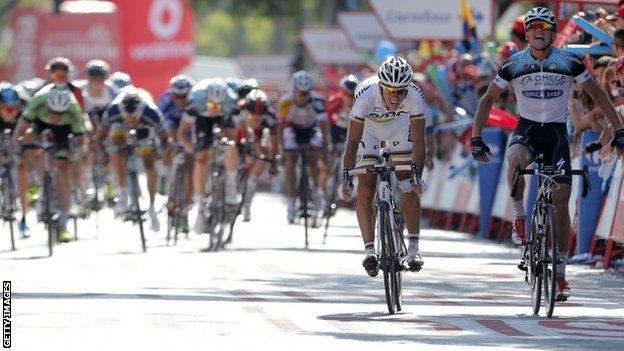 Zdenek Stybar outsprinted world champion Philippe Gilbert to win stage seven of the Vuelta a Espana by the narrowest of margins.

A photo finish was needed to determine that the Czech rider had won the 206km race to Mairena del Aljarafe.

The peloton was led over the line one second later by Robert Wagner with Britain's Andy Fenn, an Omega Pharma-Quick Step team-mate of Stybar, sixth.

The Italian also finished in the main bunch, alongside America's Chris Horner who remains second, three seconds adrift with Ireland's Nicolas Roche in third, a further five seconds back.

Team Sky's Christian Knees featured in a three-man breakaway on the flat stage but they were reeled in with around 25km remaining and with a technically demanding twisting run-in to the finish, it was no surprise that Stybar and Gilbert attacked with 10km to go.

The pair rode well together as they established a lead of several seconds and then produced a thrilling sprint finish which Stybar took by a matter of millimetres.

Saturday's stage eight is a 166km race from Jerez de la Frontera to Estepona and finishes at the top of a category one climb, the col de Penas Blancas - a 16km ascent of around 1,000m - that could see a shake up in the overall standings.