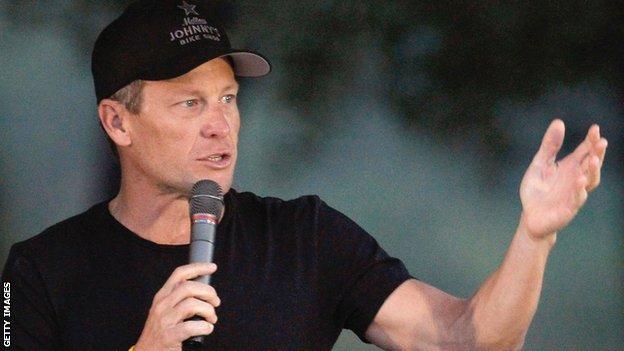 Disgraced cyclist Lance Armstrong has agreed a settlement with the Sunday Times after it sued him for about £1m, the paper has announced.

After US officials last year found Armstrong had the paper demanded the money back plus interest and costs.

The Sunday Times said it had reached a "mutually acceptable final resolution".

David Walsh, the chief sports writer of the Sunday Times, first raised questions about Armstrong in 1999, when he won the Tour de France for the first time.

In 2004, the newspaper published an article saying it was right for questions about Armstrong's performance to be both "posed and answered".

It was later ruled that the meaning of the article was that Armstrong was "a fraud, a cheat and a liar".

The Sunday Times settled that claim in June 2006.

Last year, the United States Anti-Doping Agency called Armstrong a "serial" cheat who had led "the most sophisticated, professionalised and successful doping programme that sport has ever seen". He was stripped of his seven Tour de France titles.

The cyclist had always denied doping during his career, but finally confessed in an interview with chat show host Oprah Winfrey in January.

In December last year, the Sunday Times wrote to Armstrong's lawyers saying it was now clear that the earlier proceedings brought by the athlete had been "baseless and fraudulent".

"Your representations that you had never taken performance-enhancing drugs were deliberately false," the letter added.

In the latest edition of the Sunday Times, the newspaper announced that it, Mr Walsh and Mr English had "reached a mutually acceptable final resolution to all claims against Lance Armstrong related to the 2012 High Court proceedings".

The paper said it was "entirely happy with the agreed settlement, the terms of which remain confidential.