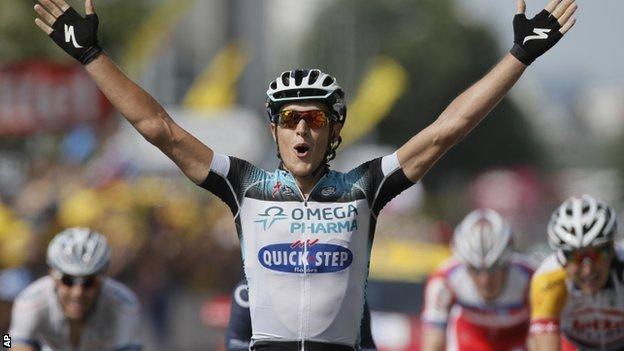 Matteo Trentin won the race to Lyon as Chris Froome retained his overall lead after stage 14 of the Tour de France.

Italian Trentin, an Omega Pharma-Quickstep team-mate of Mark Cavendish, won a sprint finish after being involved in an 18-man breakaway group.

Britain's race leader Froome finished more than seven minutes behind Trentin, but crucially, in the peloton alongside his main rivals for the race victory.

"It's been a tough two weeks for Team Sky and they really needed today's quieter day - the roads were good and they didn't need to try and chase the break down.

"There had to be one day when the break worked and once 14 teams were involved it was always going to stay away because it is much harder chasing down a bunch of 18 riders than five or six.

"The teams of the leading contenders - Team Sky, Saxo-Tinkoff and Belkin were content to save energy with Sunday's trip up Mont Ventoux to come.

"Sky will have to forget about the Bastille Day-inspired French breakaways on Sunday and work on getting Chris Froome and Richie Porte to the bottom of the mountain in a good place.

"If the wind is blowing the way it is forecast, it will be a tailwind for 200km but then the riders swing round the bottom of Ventoux.

"The first 10/11km of the climb is through a forest and sheltered but you are completely exposed for the last 5/6km and if there is a headwind or crosswind, that could favour Froome more than Alberto Contador, although Nairo Quintana may fancy it."

The Team Sky rider's advantage was reduced by more than one minute on stage 13 when Contador and Mollema successfully rode away from him in a frenetic race dominated by crosswinds.

However, stage 14 was more relaxed and, once a breakaway group which contained no riders who were a threat to Froome's overall lead had been allowed to race clear, Team Sky marshalled the peloton to the finish.

"The first 80km was pretty flat out and trying to chase the guys up the road was not an easy task," said Froome, who leads Mollema by two minutes, 28 seconds, with Contador 17 seconds further back.

The route featured seven categorised climbs and looked perfect for a large breakaway group to establish a stage-winning advantage - and that is exactly what transpired.

Germany's breakaway specialist Jens Voigt was in a group of four riders who tried to go clear early on and the quartet were soon joined by 14 other riders, who included Britain's David Millar.

The 18 riders built up a lead of more than six minutes and only split up when Julien Simon sprinted clear on the penultimate climb of the stage, 15km from the finish line.

The Sojasun rider was trying to become the first French stage winner of the race's 100th edition, but he was caught in the closing couple of kilometres as Michael Albasini and Jan Bakelants took up the pace.

Simon tried to contest the sprint but Trentin, who is usually one of Cavendish's lead-out men, was the quickest finisher and he pipped Orica GreenEdge's Swiss rider Albasini on the line with American Andrew Talansky of the Garmin-Sharp team third.

Sunday's 15th stage is the longest of the race at 242.5km and finishes with the 21km ascent of Mont Ventoux - the Provence mountain that claimed the life of British cyclist Tom Simpson 46 years ago today.

Froome, who is expecting another tough day in the saddle, said at the end of stage 14: "A climb like Ventoux at the end of a 240km stage is brutal and I'm expecting big time gaps on the general classification.

"I think a lot of people have left energy on the road and lost time over the last couple of days and there are lots of excuses to attack."

His Team Sky boss Dave Brailsford stated that the tactic would be to "go fast".

He added: "Chris is climbing and time trialling well and he can't wait for Ventoux. We think it's a stage that is going to be exciting and we want to race."