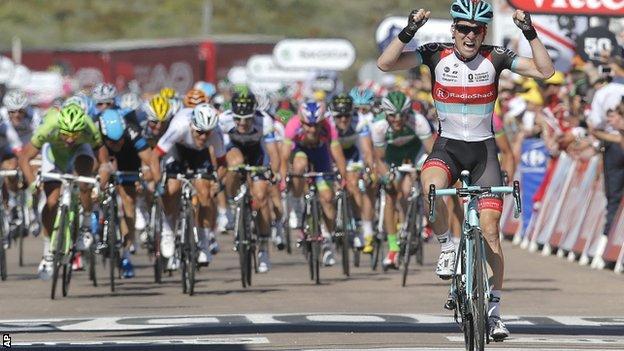 Jan Bakelants of Belgium held off the chasing pack to win an eventful second stage of the 100th Tour de France and take the race leader's yellow jersey.

Peter Sagan was second and Michal Kwiatkowski third in the 156km stage.

Pre-race favourite Chris Froome came home in the peloton after riding clear of the bunch on the final climb of the day, 12km from the finish in Ajaccio.

The British Team Sky rider followed team-mate Richie Porte up the first 700m or so of the one-kilometre climb before leaving his rivals with a sharp burst of speed as he chased down Cyril Gautier who had gone clear on the ascent.

"I knew the descent was tricky and dangerous," Froome said. "I was on the front with Richie and I thought it might be a good time, just to push on a little bit, get ahead and take the descent at my own pace and stay out of trouble.

"It's always good to keep people on their toes."

"Peter Sagan's Cannondale team put a lot of work in to put him in contention to get the yellow jersey.

"They knew this was their opportunity and they worked really hard to keep the race together and right at the death they lost it.

"It was also a real opportunity for David Millar and his Garmin-Sharp manager Jonathan Vaughters has already mentioned on Twitter that there was a moment's hesitation. As soon as there was a gap I was waiting for Garmin to step on it. Forget the stage finish, the yellow jersey was on offer.

"Froome's little move took people by surprise and that is no bad thing and it was a good little move."

Spain's Alberto Contador, who has won the race twice and is likely to be Froome's main rival, also finished in the peloton but was feeling the effects of crashing on Saturday.

He tweeted: "Already relaxed at my room, today uncomfortable on the bike after the crash of yesterday but I passed the day without problems."

Staying out of trouble was key for many riders after Saturday's crash-strewn and controversial opening stage which saw a team bus wedged on the finish line.

Stage two's scare came inside the final 5km as a dog wandered across the road in front of the peloton.

The incident came as six riders were establishing a lead and the platform that would eventually see 27-year-old Bakelants, who is riding in his first Tour de France, win the first stage of his professional career.

The RadioShack Leopard rider went for glory with more than one kilometre remaining and held on for the victory as Sagan, who had been tipped by many to win the stage, led the peloton home one second behind.

"I knew I couldn't win in a sprint so I gambled and gave everything I had," said Bakelants. "I thought of my room mate Jens Voigt and just pedalled. I had to wait five years but what a victory.

"In the end I was thinking, 'Come on! Are we going to ride and be the first six riders or are we just going to wait for the bunch to come back and see another win of Sagan?'

"I think it's going to be a short night tonight; I don't think I'll sleep much."

The race began in Bastia on the north coast of Corsica and weaved its way across the Mediterranean island to the capital Ajaccio in the south west.

Lars Boom, who was involved in a breakaway on stage one, again went clear, with three other riders, early on stage two and won the intermediate sprint.

Andre Greipel led Sagan and Mark Cavendish over the line as the green points jersey contenders in the peloton battled for precious points.

However, the hilly terrain that followed quickly accounted for several of the sprint specialists such as Cavendish and Kittel, who, as race leader, was wearing the yellow jersey - the duo eventually finished in a group more than 17 minutes behind the winner.

Sagan managed to make it over the day's highest climb, which peaked at 1,163m above sea level, with the main bunch to keep alive his hopes of a stage win.

However, attacks on the short-sharp final climb of the day, just 12km from the finish, stretched his Cannondale team-mates and when Sylvain Chavanel went clear with seven kilometres remaining, Sagan's team was unable to respond.

Bakelants could though and he and four other riders worked hard for 5km before the Belgian made his successful solo bid.