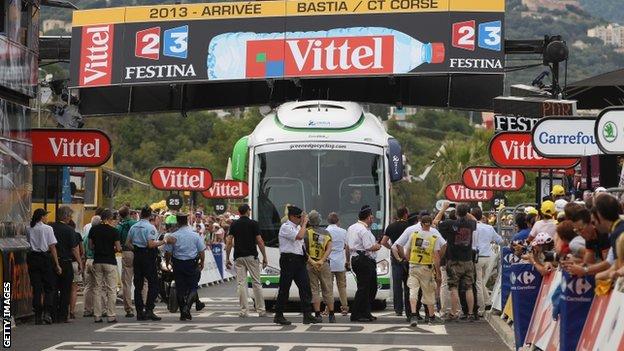 Mark Cavendish's dream of claiming his first Tour de France yellow jersey disappeared because of a crash near the end of a farcical opening stage.

Germany's Marcel Kittel won the stage, which had a confusing end after a team bus became wedged on the finish line.

With the riders less than 15km away, the finish was temporarily brought 3km forward but that decision was reversed when the bus was moved.

"The problem was the change in the finish," said Manxman Cavendish, 28.

The Omega Pharma-Quickstep rider added: "With 5km to go, we heard the sprint was in 2km - and then one kilometre later they were like: 'No, it's at the original finish.' It's just carnage.

"I didn't crash, I was just behind the crash. I'm lucky I didn't come down. My team-mate Tony Martin is in a state - he's not in a good way."

A decision on whether Martin will continue in the race will be taken on Sunday, his team said.

"He has a concussion and a contusion on his left lung. He also has soft tissue damages on his hip, chest, left knee and shoulder, and also on his back. Furthermore, he has a very deep wound 5cm wide on his left elbow that reaches his muscles, which causes a lot of pain and a problem moving his arm," said a spokesman.

Kittel, riding for Argos Shimano, was unaware of the controversy surrounding the finish.

When asked if he knew that a bus had been wedged under the finish line, he replied: "I didn't."

The stage winner also said he "had no idea" the finish had been temporarily moved.

"You always expect incidents at the Tour de France but I don't think anyone envisaged a bus almost bringing the Tour to a standstill.

"There will be a lot of angry riders and team managers because once the decision has been made to move the finish line, you've got to stick with it.

"Apart from Tony Martin, nobody appears to be seriously injured and Team Sky will be grateful to come out relatively unscathed."

Listen to 5 live's stage one podcast

Britain's Geraint Thomas, who predicted in his BBC Sport column there would be "carnage" in the opening days of the race, was also caught up in the crash and injured his pelvis - but the Team Sky rider is fit to continue after an X-ray showed no serious damage.

It was a farcical end to the opening stage of the 100th Tour, which is visiting the Mediterranean island of Corsica for the first time.

The riders were within 20km of the finish when the Orica GreenEdge bus became wedged under the overhead banner across the finish line.

The team's sporting director Matt White said: "The bus was led under the finish gantry, and we took for granted that there was enough clearance.

"Our bus driver was told to move forward and became lodged under the finish gantry. He followed all instructions in the process that followed and that allowed him to remove the bus before the finish."

As officials and police frantically tried to move the stricken bus, a statement went out over the race radio, as the riders raced inside the final 10km, that the finish would be moved to the banner 3km from the end.

That in itself looked problematic, with a dangerous-looking kink in the road at that point, but as the riders began their sprint, the bus was moved and the finish line restored.

However, as the news was relayed to the riders, there was a crash that delayed Cavendish and stopped him from contesting the finish - and also brought down two-time winner Alberto Contador.

The Spaniard, who is expected to be Chris Froome's main rival for the overall victory, crossed the line several minutes after Kittel with a hole in the shoulder of his jersey.

His Team Saxo-Tinkoff sports director Philippe Mauduit said: "He is all right but it is after the night that we will see how he has recuperated from the crash. There is no fracture."

Team Sky's Froome, who came off his bike in the neutral zone before the race started in Porto-Vecchio, escaped the carnage at the end.

"It's been quite a warning," he said. "There were some pretty brutal crashes at the end and it was a reminder that this Tour is about much more than having the form and being here, it's about staying out of trouble too.

"I felt guys were crashing all around me but I managed to pick my way through. I didn't see much, just the sound of breaking bikes and shoes going onto the road.

"I was just concerned they wouldn't give everyone the bunch time so I chased to get back up."

Because of the confusion surrounding the finish line, all riders were awarded the same time for the stage.

Cannondale's Slovakian rider Peter Sagan, a rival to Cavendish for the green points jersey, also went down in the crash, while Lotto Belisol's Andre Greipel, another who had been hoping to contest the sprint finish, had his progress halted by a mechanical problem.

All that paved the way for Kittel, a fine sprinter in his own right, to pip Norwegian Alexander Kristoff (Katusha) at the finish line, while Danny van Poppel of the Vacansoleil team came in third just ahead of Britain's Garmin Sharp rider David Millar.

Kittel will wear the race leader's yellow jersey on Sunday's second stage, which runs for 156km across Corsica from Bastia to Ajaccio.

The 25-year-old also picked up the green points jersey and white jersey as best young rider in the race.

"It feels like I have gold on my shoulders," said the German.