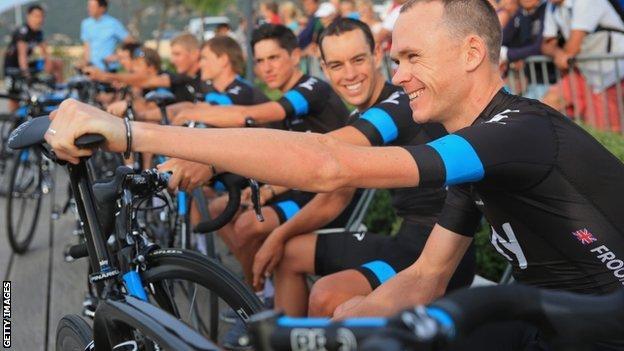 Sir Bradley Wiggins won the 2012 title but is unfit to race and his team-mate Froome will lead the Team Sky squad.

Isle of Man rider Mark Cavendish is aiming to win stage one and wear the race leader's yellow jersey, before chasing a second green points jersey.

A mix of 21 flat and mountainous stages will take the 198 riders from Corsica to Paris for Sunday, 21 July's finish.

It is unlikely that all 198 riders will complete the three-week race, which covers approximately 2,000 miles and - for the first time since the 100th anniversary race in 2003 - will be entirely held within the French borders.

Spain's Alberto Contador, 30, who has won the race three times, but had his third victory taken away for a doping offence, is likely to be Froome's main challenger for the overall race win, with 36-year-old Cadel Evans, the first Australian winner in 2011, also expected to figure.

Froome, 28, has also identified Spanish duo Alejandro Valverde, 33, and 34-year-old Joaquim Rodriguez as potential race winners. The last Frenchman to win the race was Bernard Hinault, who won his record-equalling fifth Tour in 1985.

Britain's national road race champion Cavendish is among the favourites to win Saturday's sprinter-friendly opening stage on Corsica and should he succeed he would get to wear the yellow jersey for the first time.

"Froome has looked fantastic this year, very similar to the way Bradley Wiggins prepared for last year's Tour so all the signs are there that he's the man to beat.

"Everyone's talking about him being the ultimate favourite this year."

Cavendish, who became Britain's first winner of the green points jersey in 2011, is also aiming to become only the second man to win that classification in the same year as winning the Giro d'Italia's equivalent. Points are awarded to the top-15 finishers on each stage and at intermediate sprints and the jersey is usually won by a sprinter.

The 28-year-old, who has won 23 Tour de France stages, the most of any active rider and fourth on the all-time list, will face competition from Slovakia's Peter Sagan, who won the green jersey in 2012, and German duo Marcel Kittel and Andre Greipel.

The race visits the Mediterranean island of Corsica for the first time for three stages and, in his BBC Sport column, Team Sky rider Geraint Thomas has predicted carnage with 22 squads of nine riders battling for space on the narrow, twisty roads.

Welshman Thomas, who won Olympic track gold at London 2012, will be one of Froome's main support riders - known as a domestique - throughout the Tour and will attempt to keep the Olympic time trial bronze medallist safe from any crashes.

The Tour leaves Corsica for the mainland and a 25km team time trial around Nice, before three stages take the race down to the Pyrenees for two days in the mountains that will bring the riders with ambitions of winning the Tour to the fore.

A rest day allows the race to move to north-west France for a series of flatter stages and an individual time trial that will end at Mont Saint-Michel, before the route dives south, through central France towards the Alps. That is where two of the race's most famous and feared mountain climbs await.

To mark the 100th edition of the race, Tour organisers have plotted a route that will see the riders negotiate Alpe d'Huez twice, on the same day, while Bastille Day (14 July) will see the riders tackle the longest stage, which at around 150 miles, finishes atop Mont Ventoux.

The mountain in Provence achieved notoriety when Britain's 1965 road race world champion Tom Simpson died on its slopes while racing in the 1967 Tour.

The overall winner is usually known before the now-traditional processional final-stage ride into Paris, although the finish on the Champs Elysees will be fiercely contested by the sprinters.

Cavendish has won the previous four and is chasing a record fifth successive final-stage victory.