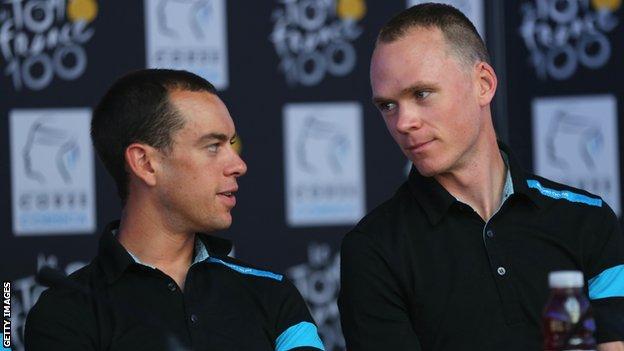 Richie Porte is confident he can guide Team Sky leader Chris Froome unscathed along the treacherous roads of Corsica.

The Australian has the task of protecting the Briton, the favourite for victory, when the Tour de France gets under way on Saturday.

But he admits the race could be lost on the first three stages as the 198 riders in the Tour wind around the Mediterranean island's narrow roads.

"The first week is always nervous, but especially so here," he said.

Team Sky looked at the course in March after the Criterium International, which takes place on Corsica and was won by Froome.

Porte, 28, who won the week-long Paris-Nice race, said: "We were a little bit shocked at just how technical it is.

"It will be the age-old adage of 'Stay at the front, stay out of trouble'.

"We ride at the front, we've done it on almost every stage for the last two years. If we can come in with the same mentality hopefully we'll get through unscathed."

Welshman Geraint Thomas, who will also be supporting 28-year-old Froome on Team Sky, reckons it could be "carnage in Corsica".

"The roads in Corsica are very narrow and are up, down, left and right the whole time," the 27-year-old said in his BBC Sport column.

"In the past I would have relished those stages but I see them differently now. I am thinking about 'Froomey' and protecting him."

Porte, who finished 34th in last year's Tour and seventh in the 2010 Giro d'Italia, believes Team Sky will miss Bradley Wiggins, last year's winner, but will be better in the mountains.

He said: "Last year we were good (in the climbs) but this year we are better. Geraint Thomas and Pete Kennaugh are climbing really well.

"You can't replace Brad Wiggins but other guys will step up like Christian Knees did last year."