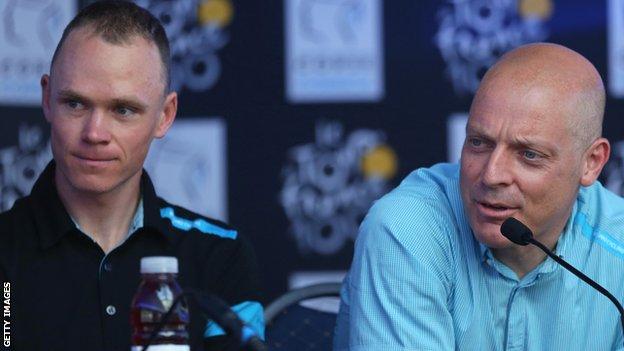 Sir Dave Brailsford says Chris Froome is "ideally placed" to take on the Tour de France which starts on Saturday.

"Chris is ideally placed to use his strengths and those of the team to take on this race," said Brailsford.

"Like Bradley, he's spent time leading races, wearing leaders' jerseys, and getting used to the extra burden of responsibility that goes with it."

But Brailsford warned against complacency and added: "Every race is different. Everyone is starting from scratch and there is all to play for.

"We are respectful of the other competitors as always. We don't take any thing for granted - complacency is not a word we contemplate."

The Briton, 28, has won four of the five stage races entered this year while Wiggins, who misses this year's race through injury, won Paris-Nice, the Tour de Romandie and the Criterium du Dauphine on his way to becoming the first Briton to win the Tour.

"Their run-ins to the Tour have been very similar in terms of their performance, in terms of the results they achieved. That's a positive thing," said Brailsford.

Froome, who finished second to Wiggins last year, cannot wait for the Grand Depart with a sprint-finish stage in Corsica.

"I feel like I'm in super condition," he said. "I'm ready and I have the support of a really strong team around me so I'm looking forward to just getting into the race now."

In the absence of Giro d'Italia winner Vincenzo Nibali, Spaniard Alberto Contador is likely to be Froome's nearest rival.

"It's a shame Vincenzo isn't here," he said. "But having said that we do have a lot of very capable contenders for this year's Tour.

"I'd say there are close to seven or eight who really stand out as being potential winners.

"It's certainly going to be a tough race this year."

Froome has already triumphed on the Corsican roads, having won the two-day Criterium International race in March.

Two-time winner Contador, returning to the event after missing last year's race because of a suspension for doping, believes he can win for a third time.

"We have seen Froome have a strong season so far," he said. "But if I thought I could not beat him I would not have the motivation to be here at this moment."