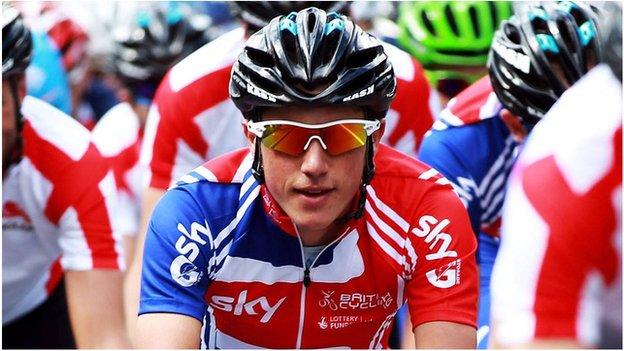 Peter Kennaugh has said he is "up for the challenge" of helping Team Sky team-mate Chris Froome win the Tour de France, which begins on Saturday.

Last week the Isle of Man rider was named in their nine-strong squad tasked with helping Froome to victory.

The 24-year-old said: "It's going to be tough but I am completely focussed on helping Chris and the team."

Kennaugh who is equally at home on the road or the track will be making his debut at cycling's biggest race.

In 2012 the Manx rider helped Great Britain to World and Olympic titles in the team pursuit. On Sunday, he finished fourth in the National Road Race Championship in Glasgow, won by fellow Manx cyclist .

"Everyone thought the Olympics was a big deal but for me the Tour de France is the ultimate as a cyclist. Hopefully we can go there and win it

"The Tour de France is an incredible event. I have watched it every year since I was six. I almost had to pinch myself when I was told I was going."

Kennaugh was selected last week for the Tour after impressing at the recent Tour du Dauphine.

He is one of alongside Ian Stannard, Geraint Thomas and Froome, 28, who was second in 2012 behind team-mate Sir Bradley Wiggins.

Kennaugh continued: "It is one of the best teams in the world to be involved with. To be chosen out of our 29-rider squad is an achievement in itself.

"I missed the Giro d'Italia earlier this year and I have had a few injuries since the Olympics but I feel great now and I am over the moon to be going.

"The Tour du Dauphine went really well - It has similar climbs to the Tour de France. It is a really tough event and I was tasked with helping Chris (Froome).

"I was invited to the a pre-Tour de France training camp and that was when they started talking about me being in the team."

Team Sky principal Sir Dave Brailsford said: "We have a group of nine riders that are all in great form and ready for the challenge ahead.

"The Tour de France has been the main goal for Chris this season and he goes into the race in great shape. With four stage-race wins this year Chris has not only grown as a rider but also importantly as a leader.

"Around him are eight quality riders who have each earned their place in the team."

Kennaugh added: "Everyone thought the Olympics was a big deal but for me the Tour de France is the ultimate as a cyclist. Hopefully we can go there and win it."

The 100th edition of the Tour de France begins in Corsica on 29 June, with the final stage finishing on the Champs Elysees in Paris on Sunday, 21 July.