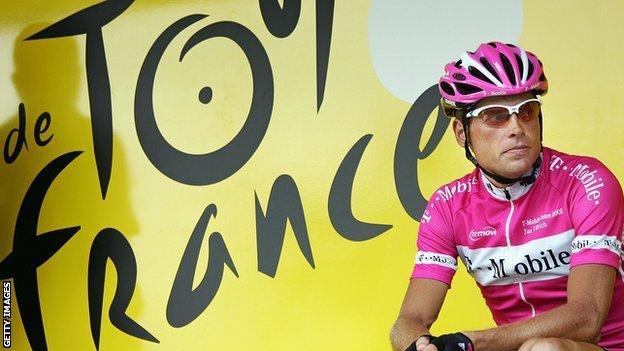 The 39-year-old German, who won the Tour in 1997, was banned for two years in February 2012 by the Court of Arbitration for Sport for blood doping and he has now admitted his guilt.

Ullrich revealed he was treated by Eufemiano Fuentes, the doctor at the centre of a doping scandal in Spain.

I am no better than Armstrong, but no worse either.

"Almost everybody back then took performance-enhancing substances," he told German magazine Focus.

"I didn't take anything which the others were not taking."

Ullrich, who retired in 2007 insisting he had "never once cheated as a cyclist", also won gold and silver medals at the 2000 Olympic Games in Sydney.

He added in the Focus interview: "For me, betrayal only begins when I gain an advantage, but that was not the case. I just wanted to ensure equal opportunities."

Fuentes was found guilty in April 2013 of playing a role in supplying blood transfusions to professional cyclists. Samples of Ullrich's blood were found during a police raid on the Spanish doctor.

Ullrich's admission is another damaging blow to cycling's reputation following Lance Armstrong admitting that he had used performance-enhancing drugs during all seven of his Tour de France wins.

"We are both guilty," said Ullrich, whose results since May 2005 have been annulled.

"I am no better than Armstrong, but no worse either.

"The great heroes of old are now people with failings that we've got to come to terms with.

"I always knew that even Lance Armstrong would not get away with it."

But Ullrich's admission did not meet with universal approval.

"This is too little, too late," said German Olympic Sports Confederation president Thomas Bach. "Jan Ullrich had his chance for a creditable admission a couple of years ago and he missed it.

"Today's confirmation of some of the already well-known and established facts does not help Jan Ullrich nor cycling," added Bach, a candidate for the International Olympic Committee (IOC) presidency.