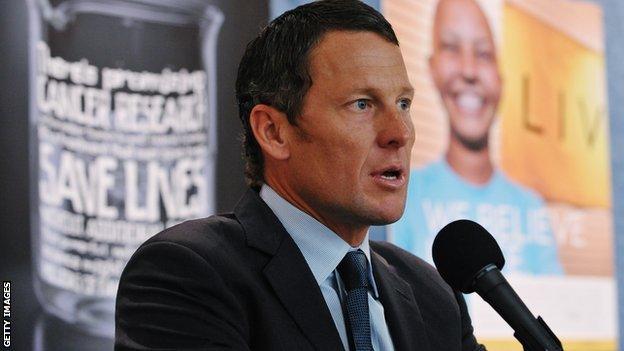 The president of British Cycling has told disgraced rider Lance Armstrong he is in favour of a "truth and reconciliation" approach to dealing with the sport's doping problems.

During a question and answer session on Twitter, Armstrong asked Brian Cookson if he had any plans to convene a commission to "fully understand the mistakes of previous generations".

Cookson replied that he "would support a full truth and rec process if legal and practical hurdles can be overcome".

The man challenging Pat McQuaid for the presidency of the International Cycling Union also referenced an earlier answer that he had given on the subject of cycling's drug-tainted past, by saying he would "prioritise the allegations which implicate the UCI in cover-ups - must be investigated independently and quickly".

Lance Armstrong: "Question for @cooksonforuci - any plans to convene a Truth and Rec Commission to FULLY understand the mistakes of previous generations?"

Brian Cookson: "@lancearmstrong See my reply to @CrisTT Also would support a full truth and rec process if legal and practical hurdles can be overcome."

(The reply to @CrisTT read: "I would prioritise the allegations which implicate the UCI in cover-ups. Must be investigated independently and quickly.")

Armstrong, who has nearly four million followers on the social media site, was stripped of his seven Tour de France titles and banned from competitive sport by the United States Anti-Doping Agency last year for his central involvement in a sophisticated doping conspiracy.

The fallen idol finally admitted his years of cheating in a TV interview in January with American broadcaster Oprah Winfrey.

Since then there have been rumours of Armstrong wanting to tell the authorities everything he knows about his doping activities, but they have so far come to nought.

Cycling's leaders have been talking about a "year zero" commission for dealing with the sport's blood-doping era ever since the full scale of Armstrong's wrongdoing emerged - the idea being that amnesties would be offered to coaches, doctors, riders and so on in return for full disclosure of any cheating they had engaged in.

The process has failed to get started, however, because of legal concerns about how it would work in practice, and more fundamental worries about who would pay for it.

Some have estimated that a meaningful truth and reconciliation commission would take two years and cost £10m, which is considerably more than the UCI can afford.

Cookson, who turns 62 on Saturday, formally announces his campaign manifesto in Paris on Monday, but this Q&A provided plenty of clues as to what will be in that call for change.

The creation of an anti-doping body that is independent of the UCI will be Cookson's "top priority", as only that can restore the sport's credibility amongst broadcasters, fans and sponsors.

He said he was also in favour of longer bans for convicted dopers, but wanted teams and the "enablers" of doping to be targeted as well as riders.

Away from the issue of doping, Cookson said he wanted to see the sport grow, with a particular focus on women's cycling, and was determined to safeguard cycling's place at the Olympics.

McQuaid, who Cookson has previously publicly and privately defended, has come under extreme pressure in recent months over the UCI's inability to catch Armstrong during his pomp, with some critics even suggesting the organisation was complicit in the scandal.

The Irishman has also been heavily criticised for his obstructive initial response to Usada's investigation into Armstrong, and UCI's tortured attempts to learn from the episode.

Cookson is the only challenger to come forward so far, but McQuaid is currently struggling to even be nominated for re-election.

An extraordinary general meeting of Cycling Ireland's members voted 91-74 against putting him forward for another term in charge, whilst his attempt to qualify for the presidential vote via the Swiss cycling federation is the subject of an appeal.

So as things stand, Cookson's is the only name on the ballot paper for the vote in Florence in September.