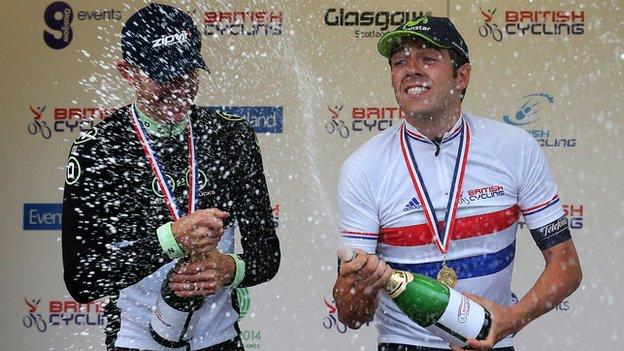 Alex Dowsett survived an early crash and a bike change to claim his third-consecutive time trial title at the British Championships in Ayrshire.

A tyre malfunction saw the 24-year-old Movistar rider come off his bike just a few corners in to the first lap.

His time of one hour, two minutes 30 seconds saw him finish 21 seconds ahead of both Matthew Bottrill and Ben Swift.

"I'm not entirely sure what happened [with the crash] but I've got a feeling that there might have been a little problem with the front tyre," said Dowsett, who recorded his first Grand Tour stage win in the Giro d'Italia time trial in May.

"I cut my hands and that made it difficult to grip the bars. My elbow hurt too but I just had to grin and bear it."

Dowsett's victory over the 49.2km Stewarton course saw him better the two championships won by Sir Bradley Wiggins and he admitted he hopes to follow the reigning Yellow Jersey winner into the Grand Tours.

"When I first took the jersey a couple of years ago, Wiggins said I'd just be looking after it," he said.

"But I'm feeling really attached to it. It's been a great year with the Giro and I'm hoping to reach the Tour de France next year. I'll see what I can do in the lead-up to that."

Earlier in the day, Rowsell, 24, completed the 35.2km women's course in 49 minutes and 25 seconds to beat Lizzie Armitstead by 32 seconds.

Rowsell said: "I set this as a target quite early in the season. Initially I was worried about the distance being 22 miles, but now I think they suit me."

London-born Rowsell, who partnered Laura Trott and Dani King to team pursuit gold in the London 2012 velodrome, was 16 seconds quicker than Armitstead at the end of the first of the two 17.6km laps round the East Ayrshire countryside surrounding Stewarton.

"I tried to pace it but I felt pretty bad to begin with, on the first lap, but felt better on the second lap, which is a good way round I suppose," she added.

Armitstead, who won Olympic road race silver in London and is favourite for Sunday's road race, underlined her form by overtaking Laura Trott, who had set out on her time trial one minute earlier.

She said: "The feelings were good. I couldn't have gone any harder, but I wasn't pulling a lung out to do it either so the sensations are getting better which is what I wanted."