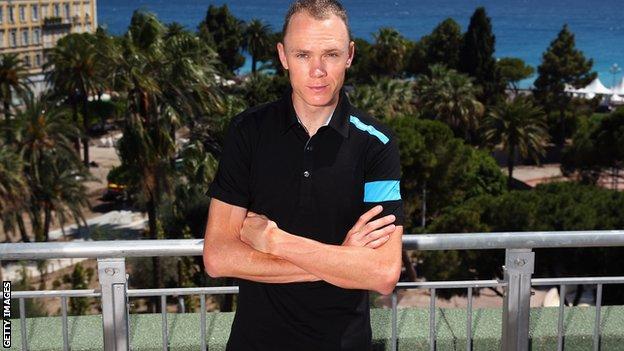 Five days before the start of last month's Giro d'Italia, Britain's cycling press and a large chunk of the mainstream sports media went to Wigan to talk to Sir Bradley Wiggins about his plan to follow a historic 2012 with a legendary 2013.

In writing, his words had all the right stuff: disarming wit, man-of-the-people straightforwardness, and serene certainty.

But the delivery was wrong. The man who had conquered France,opened the Olympics, beaten the rest of London's stars in a popularity contest and been knighted, was distracted and tetchy.

A month later, with his cursed Giro campaign a painful memory, Wiggins would be out of the Tour de France (injured, sick, surplus to requirements? No-one is entirely sure) and looking like a man with a great future behind him.

Sport is famously fickle and cycling's history is full of sadder stories than this one, but if Wiggins really has led Team Sky at a Grand Tour for the last time, it would be a remarkable transformation in the fortunes of a leader and his most important lieutenant.

Many of those who went to Wigan for Wiggo were in Nice on Tuesday to look fellow Briton Chris Froome in the eye and ask if he was ready to replace the defending Tour champion and emerge from his sizeable shadow.

Some of us joked that it might be better to interview Froome's more quotable fiancee and manager, Michelle Cound, and leave him to do his talking in the saddle. But it was only a joke.

The truth is Froome's interviews are improving almost as quickly as his results and the answer to the "are you ready?" question was "yes". The response was a little self-conscious, perhaps, and not combined with any crowd-pleasing flourishes, but "yes" all the same.

"I think I'm coming into my prime," he explained. "I'm 28 now and for the next six or seven years I could make this my goal, to be at my best for the Tour and fight for the yellow jersey.

"If I could win it once in that time, I would be chuffed to bits.

"I know winning the Tour is no easy feat and certainly for now I'm only focused on this year. Anything else is looking a bit too far in the future, but that's where I would like to go with my career."

Froome talks a lot about the future - a bit too much sometimes, he admits - but that is hardly surprising when you consider how exciting it looks right now.

Coming into 2013, he was the quiet bloke with the (South African) public school accent and nice manners. He was a better climber than Wiggins, though not as funny, not as good on the flat and certainly without his team-mate's gold medals or road wins.

Froome, in fact, had not really won anything. And we had no idea what music he liked or what he wears when not in Lycra - he was in regulation Team Sky casuals in Nice, but was wearing a debonair man-scarf at the Tour de France route launch in October. Finding out his taste in music is one of my Tour priorities.

On top of that, he was the Team Sky leader who got left behind by Spain's finest when the gradient ramped up at last year's Vuelta. Many wondered (including, perhaps, a few on his own team) if he was destined to be the Peter Taylor to Wiggins's Brian Clough.

That, however, is missing two key points: the Nairobi-born Brit is the quintessential late bloomer, though not so late that he might have already won two Grand Tours if he rode for almost any other team in the peloton.

At the 2011 Vuelta, the unimpeachably loyal Froome rode in support of Wiggins only to see him crack in the final week. The supporting actor was belatedly given star billing for a breakthrough victory on stage 17, but it was not enough to stop the unheralded Spaniard Juan Jose Cobo from winning the race by 13 seconds. Froome would be second, Wiggins third.

And then there was last year at the Tour, where his loyalty, and how far it should go, became the story. Froome, it seemed, wanted to show everybody just how faithful he was being by waiting for Wiggins on two mountain stages.

So, given how hard it is to win a Grand Tour, does he regret those missed opportunities now?

"I don't tend to linger on the past much - I'm much more focused on things to come," he said, in reasonably convincing fashion.

"I can understand people questioning that and I'm sure they'll keep asking, but we'll never know. Things are how they are and I rode those races the way I did."

For what it's worth, I think Team Sky got it spot on last year; Wiggins was the right horse to back on that track and he would have won even if Froome had been allowed to tear up the roads to La Toussuire and Peyragudes.

But, like he says, we will never know for sure.

What is certain, however, is that nobody doubts Froome's ability to cope with the pressures of asking others to push air out of his way, fetch food, give up their bikes if need be and generally sacrifice their own ambitions for the collective goal of putting him on the top step in Paris any more.

He might not be quite as comfortable in front of a camera as Wiggins (yet), but four wins from five starts this season have answered any lingering questions about his credentials to lead on the bike, particularly as they have come against every rival who will line up alongside him in Corsica, where the Tour de France starts on 29 June.

"It has been a dream start to the season," said a rider whose progress until 2011 was held back by the remoteness of his upbringing from cycling's European heartlands, starting an economics degree in South Africa and then suffering the debilitating effects of bilharzia, a blood infection.

"Being able to win every race I've entered, with one second place, has given me the chance to build my team-mates' confidence that I can deliver. It has been an invaluable experience."

As was last September's Vuelta. OK, he finished fourth, but that was after his second place in France and bronze-medal display in the Olympic time trial. He was shattered.

"I felt disappointed I had not delivered another win, having the team that I had committing to me every day, but I understood that it was on the back of a very busy season," he said. "It was probably a little bit much."

A more selfish rider might have refused the mission, seeing it as a hiding to nothing against riders who had prepared specifically for the Spanish race while he was working for Wiggins in France and Team GB in London.

Talking about nationality, it is somewhat ironic that Froome's background is so much of a story when relatively little is made of Wiggins' Belgian birth or Australian father; or Scotland's David Millar being born in Malta, his formative years in Hong Kong and adult life in France and Spain.

Alberto Contador was the main beneficiary of Froome's fatigue at the Vuelta, but the double Tour champion holds no special fears now.

"I've got his measure," said Froome, with an air of relaxed confidence that was never apparent until this year.

"I am expecting him to be at a different level again at the Tour; everybody lifts themselves that bit extra for the Tour, but I don't think he's somebody we need to be worried about.

"We've shown we can race against him and we can certainly beat him."

A fifth win in six starts this year would bring Froome the graduation triumph his talent deserves and underline Britain's arrival as the new force in world cycling.

But it would also break new ground for a continent where paved roads are still a luxury for many, let alone carbon frames and electronic gears.

"I feel I'm carrying the flag for Britain, I feel a responsibility there and an honour," said Froome, who might have ridden in Kenyan colours until 2008 but had been always raised as an expat by his British parents.

"But at the same time I have African roots and I would like that to show Africans that even coming from a third world country, it is possible to get to the top of wherever you want be."

To be fair, it has taken Froome a few years to work that out for himself.

But now he has realised that where he wants to be are places like Mont Ventoux, Alpe d'Huez and the Champs-Elysees, the top is his for the taking.