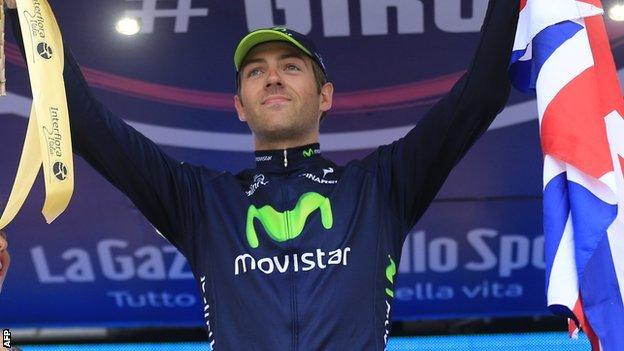 British time trial champion Alex Dowsett has said a spot at next year's Tour de France is a priority after a maiden stage win in the Giro D'Italia.

It was the 24-year-old's first ever Grand Tour, in which he

The Movistar rider told BBC Essex: "I want to do Tour de France next year.

"And in my mind I've proven to the team I'm capable of more than just finishing these races."

He added: "With the Tour starting in England next year, I'd love to be there."

And he proved his worth by contributing to his new team's second place in the team time trial before going on to beat Wiggins by 10 seconds in the 34.1-mile (54.8km) eighth stage between Gabicce Mare and Saltara.

"Winning a Grand Tour stage, I could retire now and be very content," he said. "It's amazing that I have achieved this now. I wouldn't have expected it.

"To have Wiggins in second place was huge for me. He's Olympic champion and there's my little name ahead of his.

"My dad put a scrapbook together of all the Giro cuttings. To see my name in the headlines with Wiggins was amazing."

And Dowsett, who will defend his national time trial title next week, was almost pulled out of the event mid-race.

"I had people telling me 'you don't have to finish, you've achieved so much already'," he said. "The team were concerned about my tiredness because it was my first one and I'm so young.

"I coped OK. There were moments when I questioned whether I would be able to finish, but if it was easy everyone would be good at it."