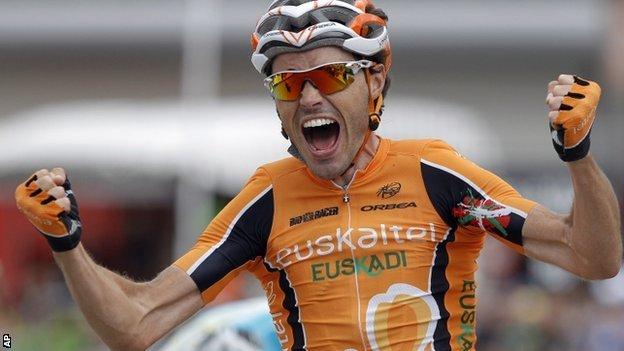 Chris Froome heads into Sunday's final stage of the Criterium du Dauphine with a healthy lead after Sammy Sanchez won a mountainous stage seven in France.

Britain's Froome, 28, continues to lead Porte in the overall standings, with his advantage standing at 51 seconds.

Australian Michael Rogers moved to third after finishing alongside Froome.

Rogers was supported up the penultimate climb of the day, the category one ascent of Col du Noyer, by his Saxo-Tinkoff team-mate Alberto Contador.

Spaniard Contador had been expected to be one of Froome's main rivals for the overall victory but a poor time trial on stage four all-but ended his hopes of victory and he sacrificed his own ambitions to help Rogers.

Froome, buoyed by his comfortable overall lead, was able to repay the hard work done by Porte on the ascents of Alpe d'Huez and Col du Noyer, on the climb to the finish at Superdevoluy, allowing the Australian to ride in his slipstream and conserve enough energy to sprint into third on the stage.

"This is one more day towards achieving my goal," said the Kenyan-born Froome, who finished second behind Sir Bradley Wiggins in last year's Tour de France.

"I know it's going to be another hard stage tomorrow, notably because we'll ride above 2,000 metres of altitude but I feel the situation is under control. Richie Porte has the legs to be there in the final climb. Hopefully we'll finish it off."

Porte reduced his deficit to Froome by one second on the 187.5km (116 miles) stage, while Rogers replaced compatriot Rohan Dennis in third place.

Sanchez broke away from the main bunch in the final couple of kilometres of the Col du Noyer and was joined on the descent by Fuglsang as the duo opened up a decisive lead on the descent.

Danish rider Fuglsang looked the stronger rider on the category three ascent to the finish but Sanchez sprinted clear in the final 100m to take the win.

"I suffered a lot, especially in the last three kilometres," said 35-year-old Sanchez who picked up his 32nd career win.

"Fuglsang was very strong but I gave everything I had to beat him at the end."

Sunday's final stage, a 155.5km (96 miles) race from Sisteron to Risoul, features three categorised climbs, The race finishes with a 14km category one climb to the finish line at the top of the Montee de Risoul.

Froome is looking to win a third successive Dauphine title for Team Sky, after Wiggins's victories in 2011 and 12.

Wiggins then went on to become the first British winner of the Tour de France - Froome will lead Team Sky in this year's race.