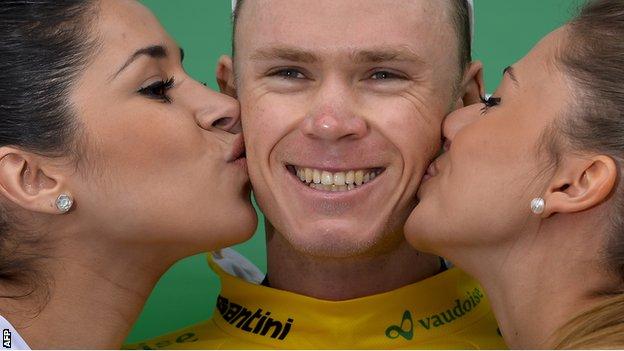 The 28-year-old, Sky's lead rider at this year's Tour de France, is now 52 seconds clear of team-mate Richie Porte in the general classification.

Garmin's Rohan Dennis is in third place overall, 54 seconds off Froome, with Contador a distant two minutes 49 seconds adrift of the leader with three stages to go.

Froome insists that he still has room to improvement before the start of the Tour de France on 29 June.

"It's definitely a good gauge for me to be able to test myself against someone like Alberto who has won multiple Grand Tours.

"To be able to finish in front of someone like him definitely gives me a lot of confidence, especially three weeks out from the Tour de France."

Contador, who missed last year's Tour de France as he was serving a ban for using clenbuterol, fell out of contention after a poor time-trial performance on Wednesday.

The Spaniard's attempts to claw back some of the time lost to Froome on the final serious climb of Thursday's stage failed as Team Sky covered his attempted break with relative ease.

Froome, who had been supported by Porte and Peter Kennaugh as the stage reached its climax in the mountain village of Valmorel, then rode clear to take yellow in style.

Froome, whose place as Sky's lead rider was assured when illness and injury ruled out a Wiggins defence of the Tour title he won last year, insists that this year's race will not be a straight duel between him and Contador.

"In my opinion there will be more than two challengers for victory, I think more like six or seven," he added.