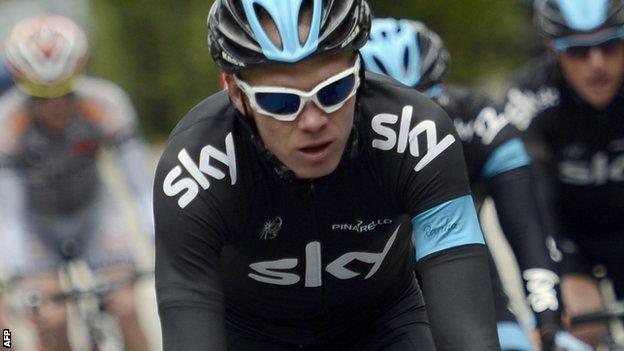 Britain's Chris Froome moved up to second in the overall standings in the Criterium du Dauphine after finishing third in Wednesday's time trial from Villars-les-Dombes to Parc des Oiseaux.

Germany's Tony Martin won the stage ahead of Australia's Rohan Dennis, who takes the overall lead.

Froome is now just five seconds behind Dennis in the overall classification.

"Of course, it's a good result for me," Froome said. "It was a good exercise and a good test for the form."

The Team Sky rider finished two minutes and 45 seconds ahead of two-time Tour de France winner Alberto Contador, who was overtaken by Froome's team-mate Richie Porte despite the Australian starting two minutes behind him.

"I had good legs," added Froome. "I don't know what Alberto's strategy is. Maybe he's keeping some energy for the mountains."

Contador admitted that "it was not a good day for me".

"I didn't have much energy in the legs, but there is still time before my form reaches the top," he told French television.

"I hope to be better and better each stage. For the Tour de France, there's still time. I knew that Chris Froome was superior in time trialling."

Thursday's fifth stage is a tough 139km ride from Gresy-sur-Aix to the ski resort of Valmorel.