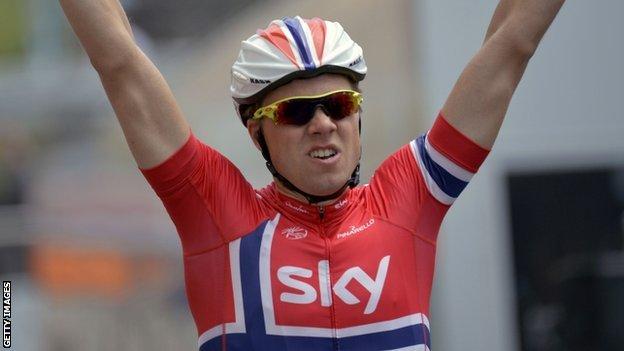 Team Sky's Edvald Boasson Hagen won a bunch sprint at the end of the third stage of the Criterium du Dauphine as Britain's Chris Froome remained in touch with the overall leaders.

Norway's Boasson Hagen powered home after being led out by team-mates Peter Kennaugh and Geraint Thomas.

Froome finished safely in the peloton as the 167km stage ended in Tarare.

The Briton remains one minute and 57 seconds behind leader David Veilleux, but has slipped to 11th overall.

There were no significant changes at the top of the general classification, with all the main contenders finishing in the same time, although Welsh rider Thomas has moved up to seventh because of his placings in the first three stages.

Thomas and Kennaugh both played a large part in Boasson Hagen's victory, helping to chase down an attack by Belgium's Bart de Clercq on the final climb of the day, the Col des Sauvages.

They reeled in De Clercq on the 10km descent to the finish line and then launched Boasson Hagen 200m from home.

The 26-year-old Norwegian road race champion held off Michael Matthews of Australia and Belgium's Gianni Meersman in the sprint to clinch his third Dauphine stage win in four years.

"I'm really happy to take the win today," Boasson Hagen said afterwards. "The team did a great job in the final kilometres. Geraint and Pete did lots of work to bring the move back.

"I felt pretty good in the sprint and I managed to take the win so I'm really happy and also really thankful for the team - it's so great to ride on it, The whole team is really strong so I look forward to the rest of the stages here."

As a time-trial specialist, Froome is expected to perform strongly and move up the standings.