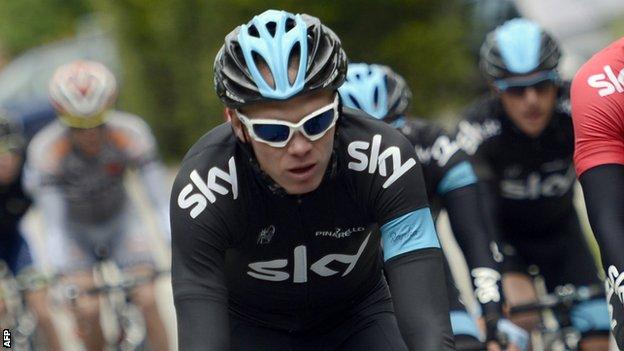 Britain's Chris Froome has dropped down to seventh but remains in touch with the leaders after a hilly second stage of the Criterium du Dauphine.

Froome, 28, finished in the peloton as the Tour de France warm-up race made its way from Chatel to Oyonnax.

Elia Viviani edged out Belgian Gianni Meersman, who is second overall, to take the stage in a sprint finish.

"The main goal today was for Richie [Porte] and Froomey not to lose any time, and we did that well," Team Sky sports director Nicolas Portal said.

"The rest of the team are fine - Vasil [Kiryienka] was tired today but he's coming off a big training block and his condition will improve every day."

Having started in fifth place after the opening day, Froome kept pace through the draining 191km trek that took in six categorised climbs.

Aided by team-mates Thomas and Peter Kennaugh, Team Sky then controlled affairs at the head of the main group as the dedicated sprinters contested the bunch finish at the death.

The result ensured Froome is still on the same time as Spaniard Alberto Contador, who is expected to be one of his main rivals.

Kenya-born Froome leads the British outfit's attempt to land a third successive Dauphine victory, after team-mate Sir Bradley Wiggins - who won the eight-stage event in 2011 and 2012 - pulled out of this race and the Tour de France because he has not been able to recover in time from illness and injury.

Stage three on Tuesday takes the riders 167km between Amberieu-en-Bugey and Tarare.