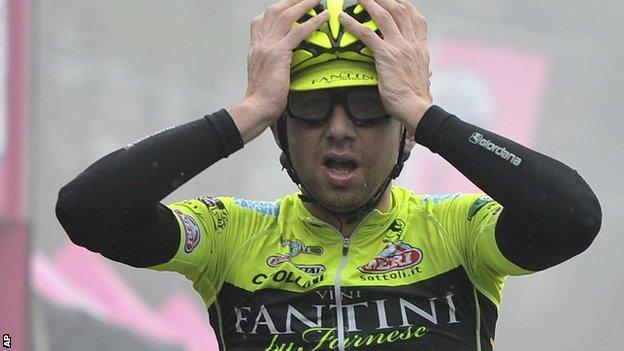 The Italian was tested on the first day of the Giro d'Italia on 4 May before he went on to win stage 14 of the race.

He is the second member from the Vini-Fantini team to test positive for EPO, after Danilo Di Luca.

The UCI says Santambrogio has the right to attend the analysis of his B sample.

Cycling's governing body also stated: "The decision to provisionally suspend this rider was made in response to a report from the WADA-accredited laboratory in Rome indicating an adverse analytical finding of EPO in his urine sample collected at the Giro d' Italia on 4th May 2013.

"The provisional suspension of Mr. Santambrogio remains in force until a hearing panel convened by the Italian Cycling Federation determines whether he has committed an anti-doping rule violation under Article 21 of the UCI Anti-Doping Rules."