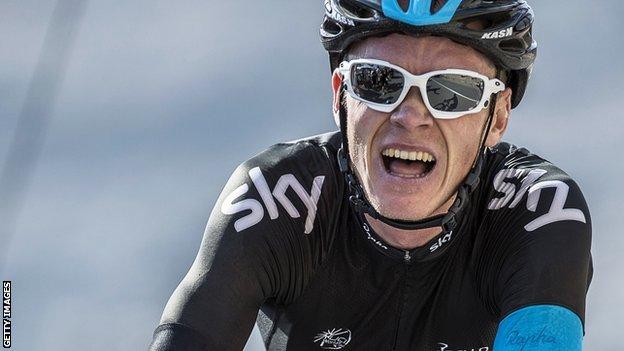 Britain's Chris Froome is fifth in the Criterium du Dauphine after the first day of the Tour de France warm-up race.

The 28-year-old is one minute and 57 seconds behind leader David Veilleux following the opening 121km stage.

Froome wants to earn Team Sky a third successive Dauphine victory, with team-mate Sir Bradley Wiggins having won the eight-stage event in 2011 and 2012.

Wiggins misses this race and the Tour because he has not been able to recover in time from illness and injury.

Froome is therefore leading Team Sky's assault on both events and is in good form having won the Tour of Oman, Criterium International and Tour de Romandie stage races so far this season.

Alberto Contador will be one of Froome's main rivals at the Dauphine and the Spaniard is 11th on the same time as the Team Sky rider.

Europcar's Veilleux took the leader's jersey after the first stage, which began and ended in Switzerland but took place mainly on the French side of the border.

The Canadian was part of a breakaway group also including Thomas Damuseau, Jean-Marie Bideau and Ricardo Garcia.

Veilleux then left his fellow escapees behind on the Col du Corbier climb with 47km remaining.

Stage two on Monday will be a hilly 191km from Chatel to Oyonnax.