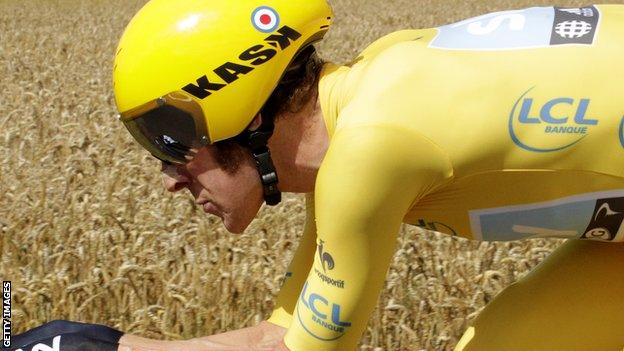 Bradley Wiggins can bounce back "stronger and fitter" for next year's Tour de France, says the last winner who was unable to defend his title through injury, Stephen Roche.

"He is at the prime of his career now. Missing the Tour de France is not a big, big deal really," said Irish 1987 Tour winner, Roche.

"His career is a long way from over."

Britain's Wiggins was forced to quit the Giro d'Italia in May with a chest infection while also nursing a knee problem and had been left with insufficient time to train for the Tour de France, which starts on 29 June.

The seven-time Olympic medallist had previously spoken of his desire to defend his Tour title rather than play a support role for his Team Sky team-mate Chris Froome, although team principal Dave Brailsford had already said the Kenyan-born 27-year-old would be their leader.

Roche, 53, won the Tour de France 26 years ago as part a triple crown, having also triumphed in the Giro d'Italia and Road World Cycling Championship, but a knee injury ruled him out of defending his Tour title the following year.

"There is no question in my mind that Bradley cannot get back to beating the best of them again," Roche told BBC Radio 5 live's Up All Night.

"I am sure it will only fuel his enthusiasm and make him come back even stronger and fitter and more eager next year. Physically, mentally and morally it is big of course but Bradley is the type of guy who keeps bouncing back."

"I came back too early and ended up having a back problem. I was still having pain and was trying to compensate with one leg. I did my back in. The most important thing is to listen to your body and don't listen to your interior saying 'I have got to get back'."

"It's a tough period for him right now but I'm sure he'll bounce back." Sutton told BBC Radio 5 live.

"There are other goals for him towards the end of the season, including winning the rainbow jersey in the individual time trial at the Road World Championships in Italy in September.

"I would like to think he would put his mind to that and become world champion."

Roche, who believes Wiggins will be better off not paying too much attention to this year's Tour, still believes Team Sky are the team to beat.

Froome, who finished runner-up to Wiggins in last year's Tour de France, has won the Tour of Oman, the Criterium International and the Tour de Romandie events so far this season.

"I am very fond of Chris, he is an incredible rider," said Roche. "Last year, when the Tour de France route was announced, he was straight away my favourite as [fewer]time trials would suit [him] more than Bradley.

"Of course, with the mountains being Froome's stronger point over Bradley I think Froome had a better option of winning. That is why Brailsford and Bradley decided Wiggins was going to the Giro this year.

"When Bradley decided he was going to give the Tour a go again a couple of weeks ago, Brailsford said the Tour had been designed for someone like Froome and Froome was Sky's best option. I think it has always been a Tour for Froome.

"You see the way he has ridden and I am convinced he is the favourite but the rest of the Sky team is strong as well."