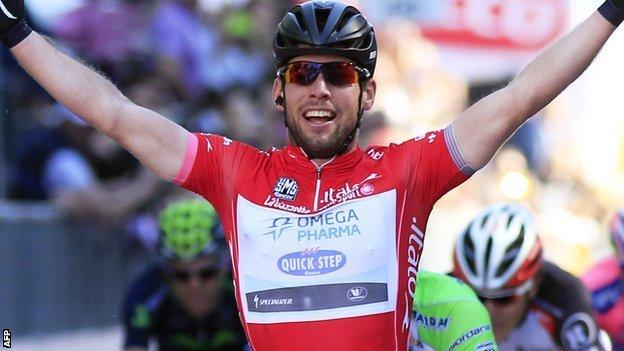 Cavendish, 28, is the fifth cyclist to win the points race on all three Grand Tours after Sunday's Giro d'Italia red jersey win.

"What keeps me always motivated is I just want to win. I've always just wanted to win, I've been addicted to it since I was a child.

"Just wanting to win brings the best out of everyone. Especially when you have a team built around you, you have to deliver 100%. That's what I try to do.

"If someone comes along who is faster, I'll go home, work harder, and come back faster the next year. It's as simple as this."

The Manxman is fourth on the list of Tour de France stage wins with 23.

"He has certainly got a good chance of overtaking the great Eddy Merckx during his career," said Cookson.

Points in cycling are given for high finishes on each stage and, in some cases, for winning sprints at certain places along the route. The points jersey is thought of as the second most important to win at a cycling stage race behind the general classification, which is the winner of the event by overall time.

Merckx, 67, is regarded as the greatest cyclist of all time with five Tour de France wins between 1969 to 1974 and a total of 11 Grand Tours - including five Giros and a single Vuelta. He also won three world titles.

The Isle of Man's Cavendish won the final stage of last year's Tour de France on the Champs-Elysees for a record fourth successive year and, in doing so, became the most successful sprinter in Tour history with 23 stage wins.

"He has won that (the sprinters jersey at the Tour de France) before, he has won numerous stages before. I think he is going to do it again," Cookson told BBC Radio 5 live ahead of this year's Tour, which starts on 29 June.

"There are one or two sprinters who weren't at the Giro but Mark seems to have the measure of them. I don't think anybody has ever had the same strike rate as Mark, he seems to be almost unbeatable once he gets into that final kilometre."

Victory on the final stage in Brescia saw Cavendish become the first sprinter in five years to win the Giro's red points jersey.

He missed out by a single point last year, after a crash hurt his hopes early in the event, but won both intermediate sprints on Sunday's flat 197km stage to overhaul an 11-point deficit on overall Italian winner Vincenzo Nibali, before edging the sprint finish.

"No British rider has ever won it in all the big tours in the same way as Mark has and the people who have won it previously have been true greats of cycling, so it is a fantastic achievement by Mark," said Cookson.

"He has gone through hell and high water and those who have been following the jersey this year will have seen the weather has been absolutely appalling. Mark has achieved something fantastic."