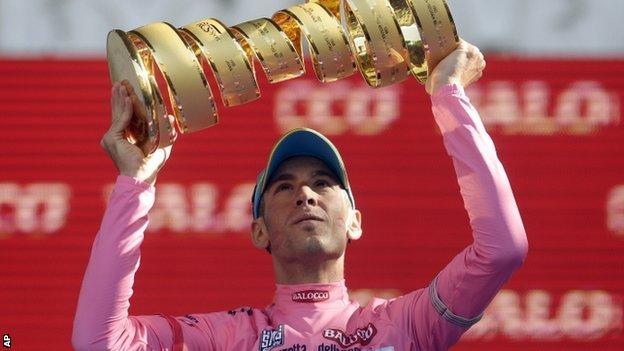 Italy's Nibali finished in the pack to win by four minutes 43 seconds from Rigoberto Uran, with Cadel Evans third.

Cavendish, 28, won both intermediate sprints on the flat 197km stage to overhaul an 11-point deficit on Nibali before edging the sprint finish.

He is only the fifth rider to win the points jersey on all three Grand Tours.

"That was a good bookend to the Giro for Cav who won the first and last stages and three somewhere in the middle. It made the fact that he stayed until the end worthwhile.

"He's right up there as the best sprinter of his generation. Nobody can touch him - he only thought there would be three sprints to go for and he's won five! Every sprint he contested he won and a 100% strike rate is not bad at all.

"Cav and his team needed that though to give them confidence going into the Tour de France.

"He'll come up against a higher standard of sprinters, such as Andre Greipel and Peter Sagan in France but Cav didn't come here in the best of shape so he can definitely go up a level.

"As for Nibali, what more is there to say? He was just better than everyone here."

The Isle of Man rider is also the first sprinter in five years to win the Giro's red jersey.

"I'm so so happy," he said. "It couldn't have been closer coming down to the last day. Everyone knew I was going to go for the intermediate sprints and I was lucky that there are some gentlemen in the peloton."

The race into Brescia was largely processional but Cavendish reduced his deficit to Nibali to three points with an uncontested victory in the first intermediate sprint and he then took the lead in the competition by winning the second sprint on the fourth of seven 4.2km laps around Brescia.

There was some confusion around the second intermediate sprint with Cavendish thinking he has picked up the eight points for being first over the line on the second lap.

With no confirmation of points forthcoming, he led the peloton over the line on lap three, only to find out that lap four was the one that would count.

"We didn't know which lap we were sprinting for," Cavendish admitted after the race. "But then we took control and didn't panic for the headwind finish."

Cavendish, who outsprinted Italian duo Sacha Modolo and Elia Viviani, picked up 25 points for winning the stage and a further 16 in the intermediate sprints to end on 158 points, 30 clear of Nibali.

As race leader, 28-year-old Nibali, who was born in Sicily, was more concerned with staying out of trouble and making sure he reached the finish line unscathed to collect his second Grand Tour victory, to add to his win at the 2010 Vuelta a Espana.

"I'm very happy," he said. "It was a really unique emotion hearing all the fans cheering for me. `I really enjoyed this stage. It was unbelievable seeing all those people along the road. This victory crowns a life's dream.

"I'm very emotional. It's beautiful, the whole team was very strong and they've done a great job all along. It is a beautiful day for me."

Cavendish will be looking to clinch a second green points jersey in the Tour de France, which starts on 29 June.