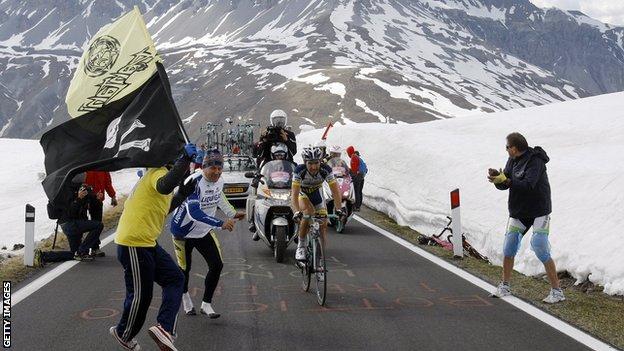 Friday's 19th stage of the Giro d'Italia is being re-routed because of snow and cold weather.

The 139km race from Ponte di Legno to Val Martello in the Dolomite mountains was set to feature the Passo Gavia and Passo del Stelvio, which at 2,783m was to be the highest point in the race.

However, the unseasonal conditions mean that neither will be climbed.

The race will instead take in the Passo del Tonale and Pass Castrin before finishing as planned at Val Martello.

The three-week long race has been hampered by rain, snow and fog while stage 14's route missed out the climb to Sestriere and an avalanche risk curtailed stage 15's climb up the the Col du Galibier.

And reports have suggested that a windchill temperature of up to -20C could hit the Stelvio pass on Friday.

Sir Bradley Wiggins, who was aiming to become the first British winner of the Giro, was forced to pull out after stage 12 through illness, while defending champion Ryder Hesjedal abandoned the race for similar reasons.