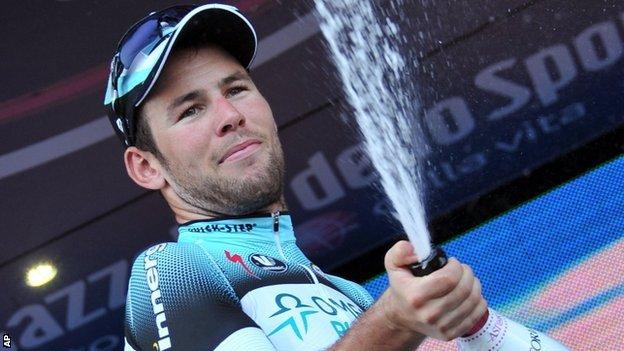 Britain's Mark Cavendish claimed his 100th professional win with a brilliant sprint finish in a rain-hit stage 12 of the Giro d'Italia, but Sir Bradley Wiggins's victory hopes appear over.

Cavendish reclaimed the red points jersey with his third win of the race.

Wiggins, who has a chest infection, fell back with 20km to go and is now 13th overall, five minutes, 22 seconds behind race leader Vincenzo Nibali.

Colombian Uran is comfortably Team Sky's best placed rider in the general classification, two minutes and five seconds behind Nibali after finishing in the main bunch alongside the other leaders.

"That was a pretty impressive win by Cavendish. He was well clear at the finish line and maintained his 100% strike rate at this year's race.

"It was a perfect lead-out by Steegmans but Cav still had to turn himself inside out and there was no way he was going to let his team down. He's happy at the Giro. He's enjoying it and he's over the weather.

"Wiggins remains under the weather though.

"He's sick but he toughed it out, although if his Team Sky team-mates hadn't dropped back to help him, he would have lost several more minutes.

"At this point it doesn't matter though. It's all over. It's going to take a miracle for him to turn it around and get any time back.

"There is no reason for him to continue if he's unwell but if his health improves he needs to stay in because of the work he has done for the season.

"If he's got any aspirations for the Tour de France, he has to do what's right for that race as well."

Wiggins, the 2012 Tour de France champion has endured a difficult Giro so far, once falling off his bike in wet conditions on stage seven and failing to deliver a victory in his specialist event - the individual time trial - on stage eight.

Wiggins came home with his main rivals in stage 11, but later revealed that he has been fighting a chest infection and on Thursday's stage 12, the Briton continued to struggle.

When the peloton injected a burst of pace with 20km to go, Wiggins could not respond and though six of his Team Sky team-mates went back to help him, they could not catch up.

Wiggins lost more than three minutes to Nibali and his chances of winning the pink jersey look more remote by the day.

There was better news for Wiggins' countryman Cavendish who fended off torrential rain to sprint to his 13th victory at the Giro on the 134km stage from Longarone to Treviso.

A breakaway established itself early on, but four riders were caught out by the treacherous conditions, falling off on a downhill right-hand bend. Maxim Belkov hit the deck first, with Maurits Lammertin, Fabio Felline and Marco Marcato following, while fellow escapee Bert De Backer managed to stay upright.

The quintet regained their composure, after what turned out to be the only major crash of the day, and maintained a lead of around three minutes for much of the stage, while Cavendish and his Omega Pharma Quick-Step team did most of the work up front as they chased and caught the break inside the final kilometre.

Cavendish's team-mate Gert Steegmans led him out perfectly, with Cavendish crossing the line in three hours, one minute and 47 seconds.

"[My team] were incredible," said Cavendish. "Before the stage, other teams were saying they were going to help because they wanted to sprint, but then they only sent one or two riders. It was mostly us doing the work.

98 comments
Back to top
unknown