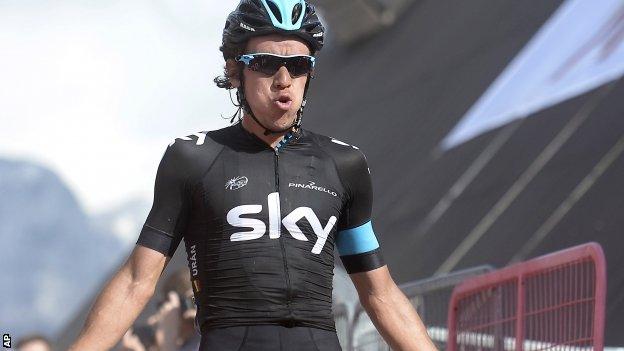 Team Sky's Rigoberto Uran surged up the final ascent with eight kilometres left to win stage 10 of the Giro d'Italia and move ahead of team-mate Sir Bradley Wiggins in the general classification.

The Colombian took advantage of the second of the stage's category one climbs as Wiggins slipped back.

Wiggins finished one minute and eight seconds behind Uran in 10th.

The Briton remains fourth overall, a second behind Uran and 2:05 adrift of leader Astana's Vincenzo Nibali.

"I think Wiggins rode extremely well today. He's certainly not on the form that we saw him in last year, but I think compared to how he has been going over the last few stages - especially in the bad weather - I think he's still bang in the race.

"He started to die off in the steep sections near the end of the stage, but that's expected of him. That's his weak part, but it's something which he has been away working on over the winter. He's looking good and Team Sky are coming good.

"Uran looked so comfortable when he attacked - and what it means now is that Team Sky have two key riders to play with. Any changes in tactics will depend on Wiggins and how he's feeling.

"Ahead of Uran and Wiggins, we've got two riders who are looking impressive. Cadel Evans is looking like the old Cadel, very strong. Nibali had a horrendous day with at least three mechanicals with his bike but he kept calm and still attacked at the finish. He looks super strong."

Australia's Cadel Evans stayed second, with an extended gap of 41 seconds between him and Italian Nibali.

Uran, who won silver in the men's road race at the London Olympics, played down the importance of him moving ahead of Wiggins in the overall standings.

"He's [Wiggins] doing fine, it's great if there are two of us ahead in the overall classification rather than one," Uran said.

"It's a very hard stage and we don't know what can happen. I just hope a Sky rider wins overall."

Following a rest day, Wiggins entered stage 10 with plenty to do having struggled simply to maintain the gap to leader Nibali in the previous stage.

But the 2012 Tour de France winner revelled in the sunny conditions on Wednesday, looking strong for much of the 167km stage from Cordenons to Montasio and riding up at the front of the peloton with his Team Sky team-mates.

The British outfit had taken the race on with 60km to go, moving to the front and dictating the pace to stretch out the bunch.

The speed proved too much for defending champion Ryder Hesjedal of Canada who dropped away and now appears to be out of contention for the pink jersey.

But inside the final 8km, it was Uran, who won the best young rider's jersey during last year's race, who launched an impressive burst up a 20% climb to take an impressive solo victory in sunny conditions in north-east Italy.

The pack gave chase, but they could do nothing about the Colombian rider, with compatriot Carlos Alberto Betancur finishing second and Nibali taking third.

"I should have attacked a bit earlier, but I'm still content with this result," added Uran.

"This morning we talked about it all and we had three cards to play - myself, Wiggins and (Colombian) Sergio Henao. So we decided to ride on the front, be aggressive and attack at the end."

Nibali, who will wear the pink jersey for a fourth day, was pleased with his performance.

"A lot of riders suffered more than usual because this stage came straight after a rest day and I am very satisfied with what I've done," he said.

"They tried to isolate me and put me under pressure, so it's good I was able to take some seconds on almost everyone."

Stage 11 takes place on Wednesday, with a 182km ride from Cave del Predil to Erto, with one category two climb and a shorter climb to the finish.