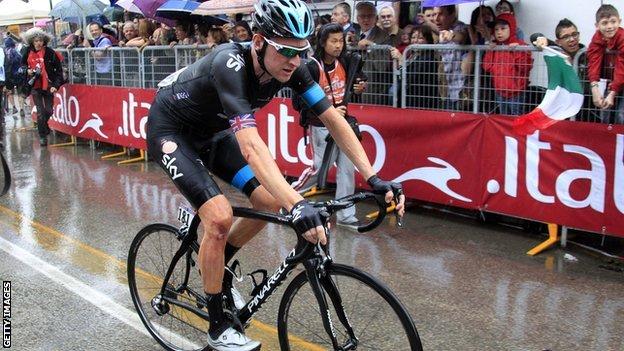 Bradley Wiggins survived a difficult day to remain one minute 16 seconds behind race leader Vincenzo Nibali after stage nine of the Giro d'Italia.

Wiggins lost touch with the pink jersey group on a long descent in heavy rain midway through the stage, which was won by Maxim Belkov of the Katusha team.

The British rider was 60 seconds behind at one stage but after a long chase by Team Sky, he rejoined Nibali's group.

Belkov won the 170km race to Florence by 44 seconds from Carlos Betancur.

It was a terrific solo win by the Russian rider who went clear on the descent of the stage's big climb to Vallombrosa after being involved in a breakaway group of a dozen riders from early on in the stage.

"Bradley did fight back well today but everybody has seen the chink in his armour.

"The Giro is not won with one big blow, it's all the small body punches you get over the three weeks and every chance they get, they put Bradley to the sword.

"I think a lot of riders will be looking forward to the rest day.

"Nine stages and a lot of miles have been covered in that first week and a lot of bad weather. I think we'll be looking at more of the same once we get into the mountains."

He extended his lead to more than seven minutes at one point and then held on to win from the fast-finishing Betancur, who sprinted past his fellow Colombian Jarlinson Pantano in the closing metres.

"I'm so happy I won this stage, my first as a pro if we exclude the team time trial," said Belkov said. "From this morning on the bus I realised it was a perfect stage for my characteristics. Moreover, I live next to here, in Prato, so I know these roads."

However, the real drama was happening in the peloton as Wiggins's descending frailties were put to the test by Nibali and his Astana team-mates.

Wiggins has looked vulnerable going downhill since crashing in heavy rain on Friday and his cautious approach on Saturday may have cost him victory in the time trial.

He was comfortably in contention throughout the first half of Sunday's stage but was quickly dropped on the descent from Vallombrosa and by the bottom of the mountain had lost more than a minute to Nibali and his other rivals for the overall race win, Cadel Evans, Robert Gesink and Ryder Hesjedal.

Several members of the nine-strong Team Sky squad helped pace Wiggins back to Nibali's group but he again struggled on the two climbs and descents in the final 30km, although he managed to keep in touch and was credited with the same time as he crossed the finish line towards the back of the peloton, 63 seconds behind Belkov.

"Bradley took it a bit cautiously on that descent and then obviously was confident his team mates would help him regain contact," said Team Sky boss Dave Brailsford. "There was never a problem."

With all the leading riders finishing together, there was no change in the overall standings, with Nibali still leading Evans by 29 seconds, with Gesink third, one minute, 15 seconds adrift and Wiggins fourth, one second further back.

The day's big loser was defending champion Hesjedal who fell back on the final short climb of the stage and finished more than one minute behind the leaders and he is now more than three minutes behind Nibali.

Monday is a rest day so racing resumes on Tuesday with a 167km race from Cordenons to Montasio, which features two category one mountain climbs.