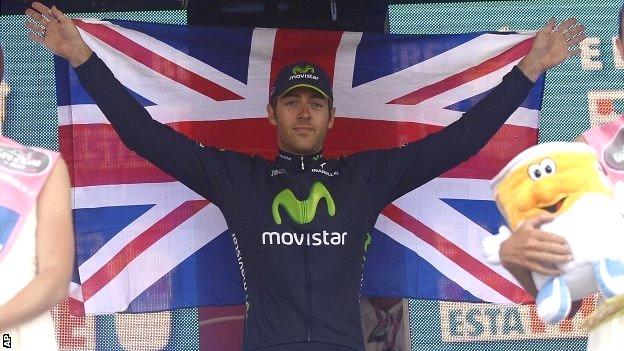 Britain's Alex Dowsett overshadowed Sir Bradley Wiggins as he powered to a surprise win in the first individual time trial of the Giro d'Italia.

Dowsett, the British time trial champion, faced a long wait after setting the pace over the 54.8km course having started 39th of the 201 riders.

Wiggins recovered from a puncture to finish second, 10 seconds behind.

But Vincenzo Nibali was only 11 seconds further back to take the overall lead, with Wiggins now fourth, 1'16" adrift.

"It was the British win we expected but not the rider we thought. I wouldn't have had Alex Dowsett down for the stage win but he rode out of his skin and it justifies his move to Movistar.

"It is hard for the younger British riders who have come up through the GB system to leave a team like Sky but he wouldn't be in this race if he was still with Sky. It is a massive win and it was written all over his face."

"It was more bad luck for Brad, although as bike changes go it was pretty quick. He didn't lose too much time but it upsets your rhythm and upsets you psychologically.

"He did well to hold it together because he looked like he was going to be massively down but he held plenty in reserve because he was 40 seconds quicker than Dowsett over the last 3km of climbing.

"He's taken a chunk of time back on Nibali and Evans but bearing in mind he's already playing catch up it's not great."

"I feel like I got everything out," Dowsett told BBC Sport. "It was super difficult and there was no opportunity to get into a rhythm and I was just riding as hard as my legs would let me.

"It's different doing a time trial in a tour because you are fatigued before you start but I've proved I can turn my hand to any type of time trial."

Just how good his time was became apparent when Wiggins, the Olympic time trial champion, reached the first intermediate checkpoint at 26km 52 seconds adrift, although Wiggins had been forced to change his time trial bike after suffering a puncture.

Australia's Cadel Evans was 22 seconds slower than Dowsett and Ryder Hesjedal was 43 seconds back, although Nibali went six seconds quicker.

Wiggins, who rode cautiously to the finish after crashing in wet conditions on Friday, appeared to again take care on the descents in the time trial, while the likes of Nibali and Evans looked to be taking more risks, knowing they had to limit their losses to superior time triallist Wiggins.

The Team Sky rider coped better with the second half of the race, which included a three-and-a-half kilometre climb to the finish, and stopped the clock just 10 seconds behind Dowsett to gain 11 seconds on Nibali, 29 on Evans and more than two minutes on Hesjedal.

"I think there was some initial disappointment because I wanted to win the stage," Wiggins told Team Sky's website.

"It's been a challenging few days with the crash [on Friday]. It wasn't an easy course. I've said all along that it wasn't one of those ones where you could take three or four minutes out of people because it was so technical at the start.

"Then obviously to have a puncture and have to change bikes and disrupt the rhythm is never going to help. But then the second part of the course was really suited to me and I took back a lot of time on people there.

"It is what it is and it's put us right back up there now. It's going to be a hell of a race for the next two weeks."

Saturday's result means Italian Nibali leads Evans by 29 seconds overall, with Dutchman Robert Gesink moving into third, one second ahead of Wiggins, after a top-10 finish on the time trial.

Sunday's stage nine is a 170km race from Sansepolcro-Firenze which features a couple of tough climbs, including a 9km category one ride up to Vallombrosa.