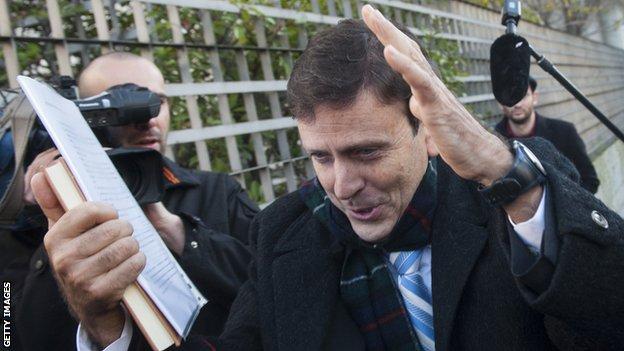 An hour late, not very conclusive and some say deeply disappointing.

Everything about the publication of the verdicts in the Operation Puerto case was in keeping with its seven-year history.

Because that is how long it has taken for Spanish justice to hand out two suspended prison sentences, a four-year ban from practising medicine and a fine to those at the centre of Europe's most talked-about doping scandal in recent years.

All those wire taps, police raids, disgraced cyclists, embarrassing headlines, internet rumours and failed Olympic bids resulted in a verdict that appears to only mildly inconvenience a doctor who doped dozens, perhaps hundreds, of cyclists and other athletes over the last 30 years.

And if there was still the prospect of sporting sanctions for all those athletes that Spanish doctor Eufemiano Fuentes helped to dope, then even that hope might be dashed by Judge Julia Patricia Santamaria's order to destroy all the bags of blood the police have seized.

The Spanish anti-doping authority, under pressure from the World Anti-Doping Agency and others, has said it will appeal against this part of the judgement.

Given that the International Olympic Committee believes in a tough stance on drug cheats, Spain's chances of staging the 2020 Olympics could rest on the outcome.

Doping was not an offence in Spain in 2006. That is why Fuentes and his four co-defendants, three of whom have been cleared, were charged with "endangering public health" and not drugs offences, sporting fraud, or some other crime based on cheating in sport.

To prove the 57-year-old's guilt, the prosecution had to demonstrate that his illicit blood transfusions, in clinics and hotel rooms around Europe, were not done to the minimum standards expected of health professionals. To prove his innocence, Fuentes had to show otherwise.

So what we got, during two months of evidence, was a succession of prosecution witnesses saying words to the effect of "this quack almost killed me", while, in response, Fuentes insisted he "was keeping these poor, oppressed cyclists alive".

Say what you like about him, but Fuentes has at least stuck to his story. In 2007, he told German magazine Stern that what he was engaging in was "therapeutic medicine" and his only concern was the health of the athletes.

"Case is beyond a joke - why would court order blood bags to be destroyed? #coverup"

"In 20 years, they may give me the Nobel Prize or build a monument commemorating my achievements," he said, slightly optimistically. "But they might kill me as well."

Fuentes, a gynaecologist by training, got into sports medicine in the early 1980s, initially working with Spain's best track and field athletes.

Having been a decent hurdler as a young man, he was comfortable in this world and soon impressed his charges with his knowledge of the latest sports science techniques, including blood transfusions, which at that stage were not banned.

One of those athletes was Cristina Perez. She tested positive for drugs shortly after the 1988 Olympics and married Fuentes later that year. With Barcelona hosting the next Games in 1992, Spanish athletics could not afford the scandal, so Fuentes was shown the door.

Those Olympics could not have gone much better for the hosts.

A revitalised Barcelona sparkled, the years of isolation under General Franco were forgotten and the country's athletes enjoyed unprecedented success, winning 13 gold medals to finish sixth in the medal table.

To put the achievement into some kind of context, Spain had only ever won four gold medals in 92 years of Olympic competition before the 1992 Games.

Five years ago, in a very rare interview, Perez spoke about her husband's work in the build-up to Barcelona.

"I know what happened in 1992 and I'm a Pandora's Box that, if opened, could bring down sport," she said.

"But out of respect for my companions, the people who sacrificed so much, I'm staying quiet, although I could speak out and ruin all those caught up in this little world."

Fuentes has often boasted of having a client list that extended far beyond the cycling community, but has never revealed who those boxers, footballers and tennis players might be.

Some have tried to fill in the gaps, most notably the French newspaper Le Monde, but its claim that Barcelona, Real Betis, Real Madrid and Valencia were on his books brought only denials and libel suits.

Jesus Manzano, the former cyclist whose 2004 interview with Spanish newspaper AS first blew the whistle on Fuentes, has told the BBC he often saw famous footballers waiting to see the good doctor when he went for his red blood cell top-ups.

What we do know is that, by 1992, Fuentes had already moved on from athletics, taking his medicine bag to cycling, where, for the next decade and a half, he was one of the sport's most influential figures.

During his stints with Spain's two most successful teams, ONCE and Kelme, Fuentes came into contact with most of the country's best riders, but he also "helped" the likes of Italian star Ivan Basso, American Tyler Hamilton and Germany's Jan Ullrich.

Juggling all these clients was a job in itself.

Fuentes used a system of nicknames and codes to keep track of who was taking what and when. Some of the nicknames were based on names of pets belonging to the people he treated; others were just in-jokes.

But the laughing stopped in May 2006.

A series of minor doping scandals had emerged in the preceding couple of years, pricking the interest of the Spanish police. After listening to phone calls, one name kept coming up again and again: Fuentes, or "Dr Blood" as Hamilton called him.

Judge Santamaria's verdict brings this chapter in the life of Fuentes to a close, but it brings no closure at all for cycling, Spain or any of the other athletes whose names have been implicated since those dramatic raids on his clinic produced more than 200 bags of blood and copious amounts of performance-enhancing drugs.

The damage to cycling has been immense. The names of 56 cyclists were immediately linked to Fuentes, sending many of them into early retirement and depriving that year's Tour de France of many of its leading contenders.

Sanctions have been harder to come by, though, with only six riders serving any kind of ban.

But none of those had anything to do with the Spanish authorities, which brings me back to why this trial ever got off the ground in the first place.

Spain, whether it likes it or not, has gained a reputation for being soft on doping.

The combined effect of Operation Puerto, Alberto Contador's contaminated steak and the fact that Lance Armstrong, cycling's biggest drug cheat, based himself in Girona for several years has undermined Madrid's two previous attempts to follow Barcelona as an Olympic host.

Will Operation Puerto cost them a third time?