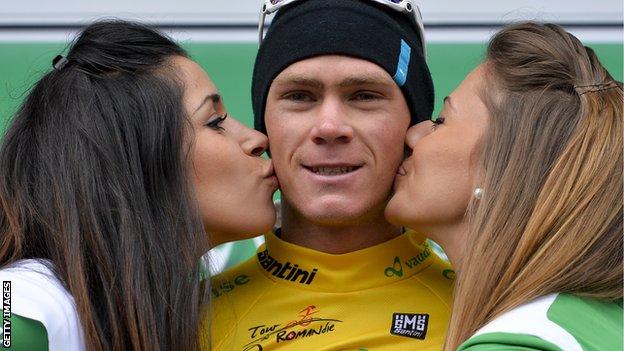 Britain's Chris Froome won the Tour de Romandie for the first time after finishing third in the final stage.

The 27-year-old, expected to be Team Sky's lead rider in the Tour de France, has also won the Tour of Oman and Criterium International this season.

He began the final day's time trial with a 47-second lead and extended that to 54 seconds, with Simon Spilak second and Rui Costa third.

The last two winners of the event, Australian Cadel Evans and Briton Sir Bradley Wiggins, have both gone on to win the Tour de France in the same year.

"It's definitely a good omen but the Tour is still two months away and I need to do a lot of hard training," said Froome, runner-up to Team Sky team-mate Wiggins in the Tour last year.

Froome, who led the event from start to finish, added: "I'm really happy with my condition now. It's just been a really, really good week for us."