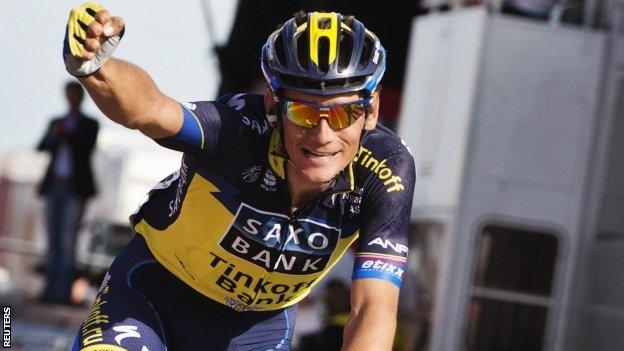 The Czech rider held off the challenge of Belgium's two-time winner Philippe Gilbert on the final climb up the Cauberg to win by 22 seconds.

Gilbert was beaten in the sprint for the podium places by Spain's Alejandro Valverde and Australia's Simon Gerrans.

The riders tackle La Fleche Wallone on Wednesday before the Liege-Bastogne-Liege race on Sunday, 21 April.

Kreuziger, who rides for Saxo Tinkoff, completed the 251.8km race from Maastricht to Valkenburg in six hours, 35 minutes, 21 seconds.

"It's a big surprise," he said. "But the whole team did an excellent job and I was fully prepared for the finale and I was feeling strong all the way.

"On the final climb of Cauberg, I just looked down and pedalled without thinking so much."

The toughest of classics

He moved clear of a bunch who had escaped from the peloton on the short climb up the Bemelerberg and opened up enough of an advantage to stay clear on the famed 900m ascent of the Cauberg which comes in the final couple of kilometres of the race.

Gilbert, who won last year's World Championship road race over a similar course, gave chase on the Cauberg but all he succeeded in doing was to drag Valverde and Gerrans along in his slipstream.

The trio were too far back to catch Kreuziger though as he became the first Czech rider to win the race which was first staged in 1966.

Valverde and Gerrans won the sprint for second and third, with Gilbert fourth, with fractions of a second separating them and the next half a dozen or so riders, who had all closed in late on.