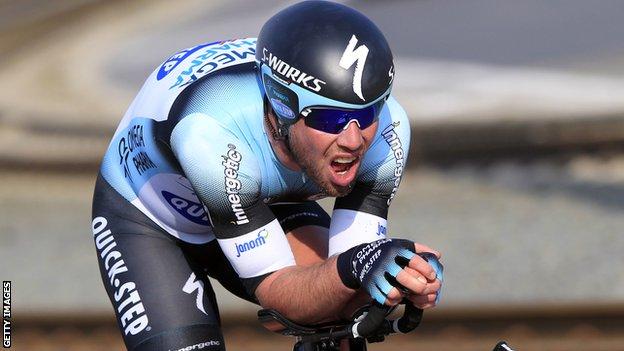 Mark Cavendish was denied a record fourth victory in the Scheldeprijs after narrowly losing out to Germany's Marcel Kittel in a sprint finish.

The Manxman, 27, left his final push too late and missed out on victory in a thrilling finale by less than a wheel.

Cavendish said: "I just ran out of time. But Marcel Kittel won and it's not like he's not one of the best sprinters in the world.

"So I can't be too disappointed, losing a close finish to a guy like that."

Tour of Flanders winner Fabian Cancellara crashed early on in the 127-mile race, hitting his thigh and knee.

But he continued to race in Belgium to show he is ready for Sunday's cobblestone classic Paris-Roubaix.

Following the race Cavendish admitted he had extra motivation to win - he wanted the victory to mark his daughter's first birthday.

He explained: "I missed the race a year ago today because she was due to be born. So I wanted to come here and win for her, for her birthday present."