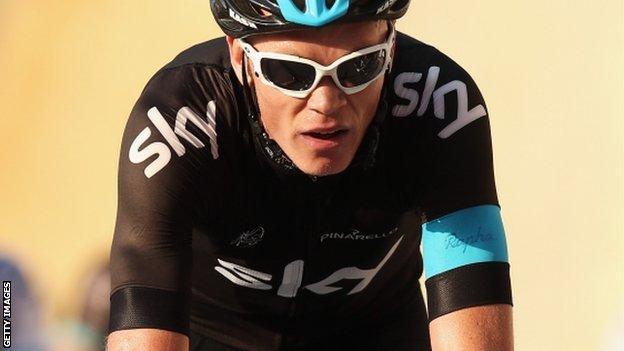 Froome attacked with 5.5km remaining on the ascent of Col de l'Ospedale and reached the summit finish 27 seconds ahead of team-mate Richie Porte.

The Australian had started the third and final stage as leader of the race, two seconds ahead of Froome.

The Col de l'Ospedale overlooks Porto-Vecchio on Corsica where the 2013 Tour de France will start on 29 June.

Froome finished runner-up to team-mate Sir Bradley Wiggins in last year's Tour de France but has made it his main objective for this year.

And the Kenyan-born rider is enjoying a decent build-up, having already won the Tour of Oman and finishing second at the Tirreno-Adriatico this season.

His showing on the French island of Corsica, which hosts the Grand Depart of the three-week Tour de France in late June, will further buoy his team.

"The stage panned out more or less how we expected," he said. "The plan was to control the race throughout the day. It was a huge job and we really put pressure on the other teams.

"Richie and I didn't have to make any big efforts until right at the end. The team did that work for us and all we had to do was finish it off.

"I didn't really intend to attack on the climb, but when the gap widened between myself and Richie, I felt I could go on, so I went for it."

Team Sky set a quick pace on the 14.1km ascent of Col de l'Ospedale which proved too much for Australia's Cadel Evans, who won the 2011 Tour de France, and his American team-mate at BMC Racing Tejay van Garderen.

Evans was dropped with 10km remaining on the climb while Van Garderen could only finish third, 54 seconds behind Froome.

Paris-Nice champion Porte ensured a Team Sky one-two when he made his own break with around 2km of the stage remaining.

"Froomey set a hard tempo after Vasil Kiryienka's mammoth turn and I thought I'd let a small gap go to see what happened, and that was the last we saw of Froomey, he was gone.

"It wasn't planned but it worked out perfectly. We ride together every day so we know each other so well, and when he went nobody reacted so he had to continue."