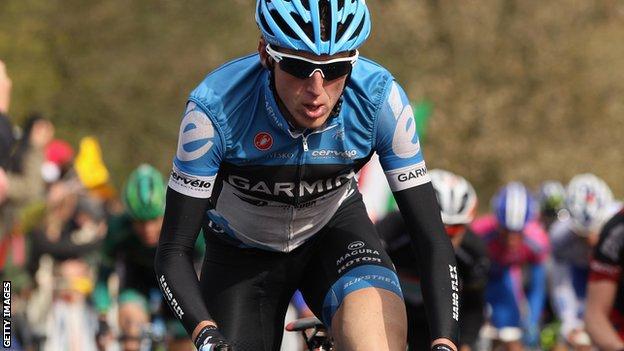 Ireland's Dan Martin won the fourth stage of the Tour of Catalonia to take the overall lead as Sir Bradley Wiggins lost time on the final climb.

Martin, 26, broke clear on the climb to Port Aine Rialp at the end of the 217.7km stage in the Pyrenees.

Joaquim Rodriguez and Nairo Quintana were 36 seconds adrift with Wiggins a minute and two seconds back.

Martin leads Rodriguez by 10 seconds in the overall standings with Quintana at 32 seconds and Wiggins 36.

Overnight race leader Alejandro Valverde pulled out of the race, with his Movistar team-mate Eros Capecchi, after a crash on the Queen stage of this year's race.

The Spaniard hit the deck around 119km into the stage on a descent towards Seo de Urgel, riding on for another 10km before abandoning.

"Valverde and Capecchi have bruises all over their body, but we believe there is nothing more serious," said team manager Eusebio Nzue on Twitter.

The peloton briefly waited for Valverde - as is customary in bike racing - but when it became clear that he was unfit to race on, they began to chase down Martin, who had gone clear with 22 other riders on the first climb of the day and opened up a lead of more than four minutes.

The leading bunch began to diminish on the first of the day's two hors-categorie (most difficult) climbs - a 24.6km climb to Port del Canto - with 45km remaining and Martin then reeled in his Irish cousin Nicolas Roche, who had made a break, before leaving Jose Herrada on the final climb.

Quintana was the first to attack from the chasing pack and he was eventually joined by Rodriguez, but the duo left their challenge too late and Martin comfortably held on.

Tour de France champion Wiggins, who started the day 10 seconds off the lead, lost his Team Sky team-mates after they exhausted themselves chasing the breakaway, and was unable to go with Quintana and Rodriguez.

Stage five of the seven-day event is a 157km race from Rialp to Lleida which features just one climb of any significance and could well end in a bunch sprint.