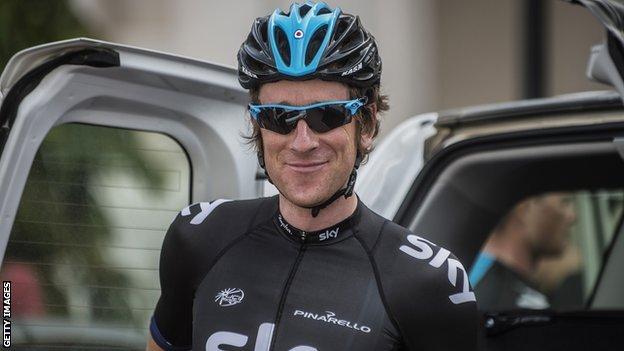 Sir Bradley Wiggins is 20 seconds off leader Gianni Meersman after the second stage of the Tour of Catalonia.

Meersman won his second successive stage win to extend a lead that stood at four seconds after the first day.

Five stages remain with Wednesday's 180km ride to Valter 2000, the first day in the Pyrenees mountains.

Tuesday's result leaves Wiggins, 32, eighth in the overall standings before the start of the serious climbing.

The trio worked alongside rival teams Blanco and Omega Pharma, to push along the pace with the rest of the pack and reel in an early three-man breakaway led by Christian Meier.

The peloton's efforts were rewarded as the trio were overhauled with 20km of the 161km course to go, at the end of the second of four laps around the day's destination Banyoles.

Although Meersman prevailed in the final sprint, chased home by Daniele Ratto and Brett Lancaster, Wiggins followed shortly after to minimise the Belgian's gains.