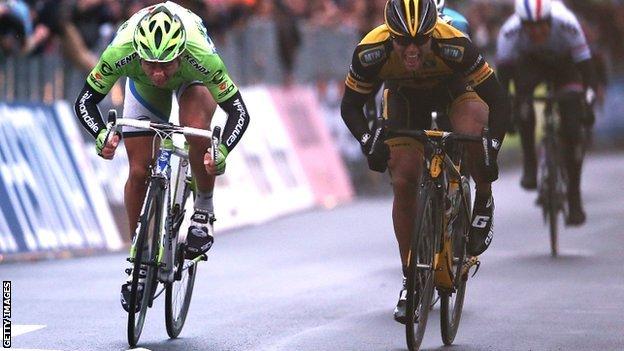 Team Sky's Ian Stannard was the best-placed British rider in sixth, with Mark Cavendish ninth, 14 seconds behind in the chasing pack.

I'm frozen and I don't want to be sick

The 298km race was temporarily halted after 117 kilometres.

Because of the appalling weather conditions, team buses had to transport the riders about 50km, bypassing the crucial climb of La Manie, to restart 130km from the finish.

A six-man group that had broken away from the main peloton was allowed to resume racing with an advantage of seven minutes, 10 seconds but a number of riders decided to abandon the race, including 2011 winner Matthew Goss and British duo David Millar and Geraint Thomas, who crashed.

Belgium's Tom Boonen, a Classics specialist, also quit the race and told Belgian channel Sporza: "There are two reasons for me giving up. First, I'm frozen and I don't want to be sick. Second, it's a statement to the organisers."

The leading group were caught 30km from the line and world road race champion Philippe Gilbert chose his moment to launch a challenge before France's Sylvain Chavanel, Britain's Stannard and Russia's Eduard Vorganov made their own bid on the final climb at Poggio, 10km from the finish, as they opened up a 27-second lead.

The trio were caught on the descent into San Remo and as Vorganov drifted away, Stannard, the weaker of the sprinters in the leading bunch, attacked again inside the final couple of kilometres.

But he was easily caught as 2008 race winner Cancellara, Sagan and Ciolek challenged for the podium places in the final 200m.

Sagan led the way but Ciolek emerged from his slipstream to win the race by a matter of inches after five hours, 37 minutes and 20 seconds of racing.

"I was on Sagan's wheel - and that was the best place to be," said the 26-year-old German after his first Classic success.

"This is an unbelievable success for us and just an incredible day. We just came here as a wildcard and now we're standing here with the trophy."

Stannard was awarded the same time as the winner and his sixth place represents Team Sky's best finish in the race.

Cavendish was beaten in the sprint for the minor places by Alexander Kristoff.