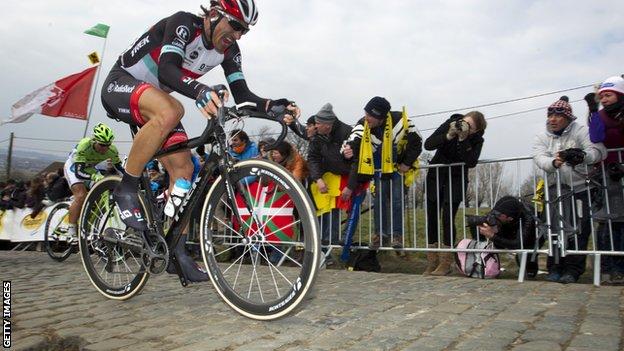 Switzerland's Fabian Cancellara underlined his status as one of the sport's one-day specialists by winning two of the seven 'Spring Classics' in 2013.

The 32-year-old picked up his second Tour of Flanders victory before mastering more cobbles to win a third Paris-Roubaix title.

Slovakian youngster Peter Sagan, 23, bolstered his growing reputation with victory in the Gent-Wevelgem, while he was second in the Milan-San Remo and Tour of Flanders races.

BBC Sport details the winners of each of the 2013 races:

German Team MTN sprinter Gerald Ciolek won the first classic of the cycling season in a sprint finish ahead of favourite Peter Sagan and Fabian Cancellara.

Slovakia's Peter Sagan broke clear in the closing 3km to win in Flanders.

The 23-year-old Cannondale rider even had time to pull a wheelie as he crossed the line 23 seconds clear of second-placed Slovenian Borut Bozic.

Mark Cavendish was the first Briton to finish, in 18th place among a group 40 seconds behind Sagan.

Belgium's Tom Boonen, who was looking to become the first rider to win the race on three consecutive occasions, abandoned the race after crashing into a kerb.

Switzerland's Fabian Cancellara broke clear on the final cobbled climb of the race to win his second Tour of Flanders by almost 90 seconds.

The 32-year-old rider attacked close to the summit of the Paterberg to leave his main rival Peter Sagan, who finished second, in his wake.

Britain's Geraint Thomas had high hopes of a first win but his race was derailed by a crash with 36km remaining although he did complete the race.

Defending champion Tom Boonen crashed out inside the opening 20km and will not ride in any further races this spring.

There was another victory for Fabian Cancellara as he beat Belgium's Sep Vanmarcke to win the race for the third time. After a 254km race, the win was decided in a track-style sprint in the Roubaix outdoor velodrome, with the Swiss winning by a wheel.

Britain's Geraint Thomas was again frustrated as he was involved in a crash 73km from the end, which ended his chance of challenging.

Roman Kreuziger surprised even himself as he became the first Czech rider to win the Amstel Gold in the Netherlands.

The Saxo Tinkoff rider broke clear on the Bemelerberg and held on up the final climb of the Cauberg to win by 22 seconds.

Two-time winner Philippe Gilbert, who won last year's world road race title over a similar course, could only finish fourth, after he was outsprinted by Alejandro Valverde and Simon Gerrans in the race for the podium places.

Spain's Daniel Moreno had the strongest legs on the ascent of the Mur de Huy as he won the second of the Ardennes Classics.

Henao's compatriot Carlos Betancur was third, with Ireland's Dan Martin and Michal Kwiatkowski of Poland also credited with the same time in fourth and fifth.

Ireland's Dan Martin won the 99th staging of the oldest of the one-day classic races. The Garmin-Sharp rider jumped clear of the field on the final bend to win by three seconds.

Team Sky's Chris Froome was the best-placed British rider in 36th, one minute and 14 seconds adrift of Martin.