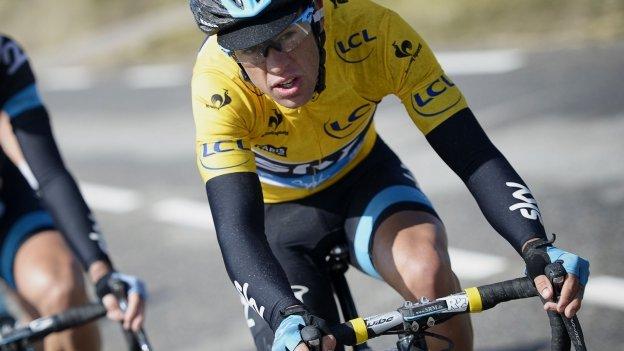 Richie Porte produced a stunning climb up Col d'Eze to become the first Australian to win the Paris-Nice race.

Nairo Quintana was third on the stage while Jean Christophe Peraud's fourth place lifted him to third overall.

But all eyes were on Porte, who as the overall race leader was the last rider to leave the start.

He set off at a frenetic pace, led by 21 seconds at the intermediate time check and maintained his form to the finish.

His time was just four seconds outside that of team-mate Sir Bradley Wiggins, who set a record on the stage when he won the race last year.

"I can't believe it," he said. "I'm the first Aussie to win and it's just an honour to have my name up there with all the big champions like Wiggins."

Last year Wiggins went on to win the Tour de France after triumphing in the Paris-Nice but Porte said his thoughts would now return to helping his team succeed on the three-week race in July.

"I'm still doing my apprenticeship and learning off Brad and Chris [Froome] and I don't expect to ride for general classification at the Tour - maybe next year at the Giro.

"I'm in a good place at the moment and don't really want to change anything. Whatever happens we're going to have a hell of a team for the Tour de France."

Colombian Quintana had set a challenging time of 19mins 43secs which proved too tough for all but Talansky and Porte.

Talansky beat Quintana's time by four seconds but any hopes the Garmin rider might have had of taking the overall win were quickly ended by Porte.