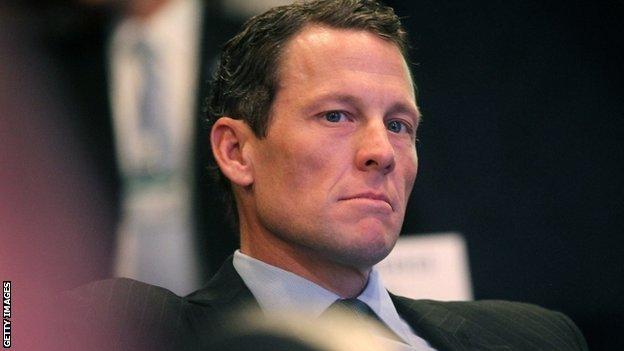 The US government has joined a lawsuit against Lance Armstrong after talks with his lawyers broke down.

The suit argues Armstrong defrauded the American public by insisting he was not using drugs while riding for the publicly funded US Postal Service team.

The suit, filed by his former team-mate Floyd Landis, aims to recover sponsorship money from Armstrong.

"Lance Armstrong and his cycling team took more than $30m from the US Postal Service based on their contractual promise to play fair and abide by the rules - including the rules against doping," said Ronald C Machen Jr, US Attorney for the District of Columbia.

"The Postal Service has now seen its sponsorship unfairly associated with what has been described as 'the most sophisticated, professionalised, and successful doping programme that sport has ever seen'.

"This lawsuit is designed to help the Postal Service recoup the tens of millions of dollars it paid out based on years of broken promises.

"In today's economic climate, the Postal Service is simply not in a position to allow Lance Armstrong or any of the other defendants to walk away with the tens of millions of dollars they illegitimately procured."

Armstrong's legal team had tried to convince the US government not to join the so-called 'whistleblowing' lawsuit filed by Landis, who himself admitted using drugs throughout his career.

"Lance and his representatives worked constructively over these last weeks with federal lawyers to resolve this case fairly, but those talks failed because we disagree about whether the Postal Service was damaged," said Armstrong's counsel Robert Luskin.

"The Postal Services's own studies show that the Service benefited tremendously from its sponsorship - benefits totalling more than $100m."

By flagging up allegations of fraud, Landis could receive a substantial share of any money recovered from Armstrong under the federal False Claims Act. The law, introduced by President Lincoln in 1863, stipulates the person bringing the lawsuit can receive 15-25% of any damages.

Armstrong ended years of denial in January during an interview with chat show host Oprah Winfrey in which he described doping as part of the process of winning the Tour.

The 41-year-old has since said he will not agree to be interviewed under oath by the United States Anti-Doping Agency (Usada).

Armstrong was charged by Usada in June 2012 with using performance-enhancing drugs.

He filed a lawsuit against the organisation the following month, accusing it of "corrupt inducements" to other cyclists to testify against him.

However, Armstrong then announced in August that he would not fight the doping charges filed against him, and was given a life ban by Usada and stripped of his Tour de France titles.