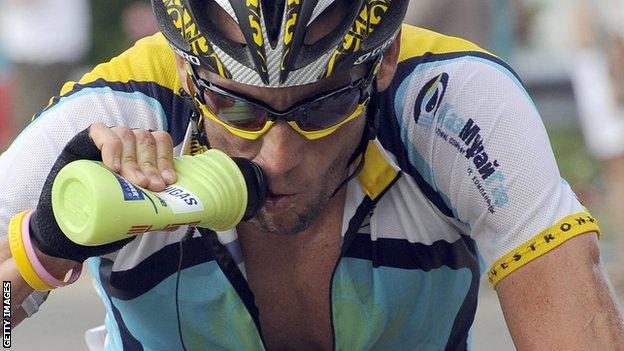 British cyclist David Millar says Lance Armstrong's confession is a crucial step forward for the recovery of the sport.

Armstrong admitted he used performance-enhancing drugs during all seven of his Tour de France wins.

Millar, who was banned for two years for taking the drug EPO in 2003, told BBC Sport: "We have got to a point now where we are a new cycling.

"We need Lance to say this. I think it's necessary that we have closure."

Armstrong made the confession during his interview with chat-show host Oprah Winfrey in front of a worldwide television audience.

The second part of the interview will be broadcast at 0200 GMT on Saturday.

"I think we are already getting some good from this," said Millar.

The case against Armstrong

"We've got to a point where it's possible to win the biggest races clean and that has been through hard work and people inside the bubble recognising just how serious the doping problem had got.

"Economically, in order to survive, teams had to start to be clean and management had to start to take control of affairs. They couldn't turn a blind eye anymore, there was no more heads in the sand.

"The process has been going on for a long time. We are now dealing with the aftermath of why we started that in the first place."

Despite Millar's suggestion that the sport has come a long way, UK Anti-Doping Director of Legal Graham Arthur says he still does not believe cycling is drug free.

"I don't think you can say that any sport is drug free," Arthur told 5 live Drive.

Armstrong, who won the Tour de France seven successive times between 1999 and 2005, said that doping was "part of the process required to win the Tour".

Millar agreed saying "that's the state the sport was in at the time unfortunately".

He added: "Everyone has this nostalgic idea, this utopian view, that maybe years ago cycling was clean. It never really was.

"We had a fundamental, cultural problem within the sport. Now we've totally shifted. We've got to a point now where we are a new sport and I think it's very healthy where we are.

"The reason we've got such a clean sport now is because we were such a dirty sport and in order for us to survive we had to clean it up ourselves. And that's what we did.

"I've got a young son and a few years ago the last thing I would have ever wanted was for him to become a professional cyclist. But now I'd have no problems with that."

Millar believes that a confession was vital for the sport but says that it is only the first step to learning from what happened.

He said: "I think the next step for him is to speak with his national anti-doping agency, to go to UCI, to go to Wada, to disclose everything fully behind closed doors, under oath with the actual people who can make a difference with it.

"This has been very public, and he's a very public figure so I guess it's quite appropriate that he's done it in this way.

"But at the same time I think the next step is for him to actually go to the relevant bodies to actually deal with this in the correct manner.

"He has to simply be a decent human being and reconcile his past. He has to tell us the truth and help us reconcile what happened these last 15 years and move forward continuing in the direction we've already found.

"We have found the way forward in cycling and this is what must not be forgotten and I think unfortunately it's getting grossly overshadowed at the moment.

"We have found a way forward but we are dealing with the past. All the skeletons are coming out of the closet and now we need to see them all and we just need to understand what happened."

The BBC Sport website will have a special live text commentary during the second Oprah Winfrey broadcast at 02:00 GMT on Saturday.