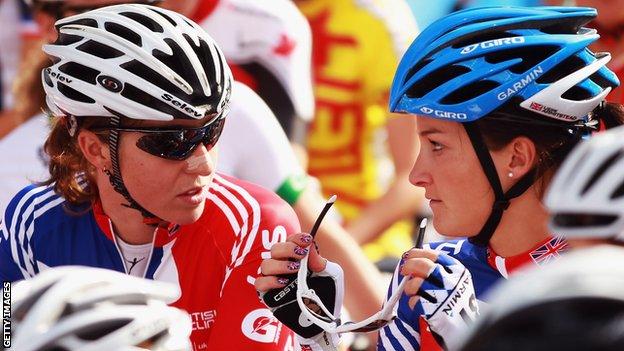 Cooke said she felt "robbed" by dopers and had come under pressure to take performance-enhancing drugs.

"To me it's old news and should be left there," Armitstead told BBC Sport.

She later clarified her position on Twitter, writing: "I have no issue with NC statement and believe in everyone's right to an opinion."

The 24-year-old added: "Probably shouldn't give the bullies the time of day but my opinion in my own words. What LA [Armstrong] has done to the sport of cycling is unforgivable.

"I am happy the truth has come out for the good of cycling. I am not naive, cycling is not 100% clean but which sport is?

"I am a part of a new generation of cyclists who compete honestly and quite rightly feel upset and disappointed that it is suddenly an expectation of me to be a politician.

"Cycling is a beautiful sport which I love. But I have a job which takes up enough of my energy without being abused on Twitter."

Armitstead and Cooke, team-mates at the London Olympics, were involved in a fall-out at the 2011 World Championship as Cooke rode on when Armitstead crashed.

Cooke retired on Monday after a career which saw her win Olympic road race gold in Beijing in 2008 and the World Championship road race in the same year.

In her retirement statement she said: "I do despair that the sport will never clean itself up when rewards of stealing are greater than riding clean."

But, although Armitstead understands why Cooke spoke out, she said on Tuesday that she did "not understand the benefit of bringing it up".

She added: "I just find it upsetting because the sport that I love, cycling, is clean now. My sport now is not that sport anymore.

"We shouldn't be adding fuel to the fire because for me, if I was a general member of the public and I saw someone in Nicole's position, at the top elite level of sport saying something like that, you're going to believe it."

When asked if she had ever been offered any drugs, Armitstead answered: "That's never happened to me, no."

Armitstead may not have enjoyed a smooth relationship with Cooke during her career, as the two also battled to be lead rider for Team GB in the Olympic road race, but the Yorkshire rider praised Cooke's "fantastic career".

"She has been so dominant for so many years but in the last season I could see she was not perhaps the person she was," concluded Armistead.

"I think it's good for her to retire and move on to something new."