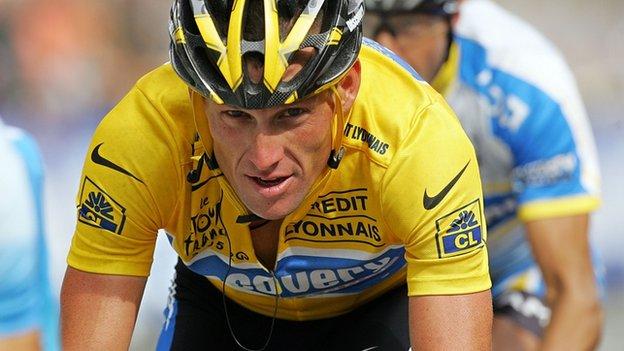 Lance Armstrong is considering whether to publicly confess to doping, according to the New York Times.

The paper claims the 41-year-old could admit to the findings of a report by the United States Anti-Doping Agency.

Usada found Armstrong and his US Postal Service team had run "the most sophisticated, professionalised and successful doping programme that sport has ever seen".

He was stripped of his seven Tour de France titles and given a lifetime ban.

The Texan, who did not co-operate with the Usada investigation and has always denied doping, has remained silent since the report although he opted not to appeal against the decision.

However, mention of his seven Tour wins was subsequently removed from his Twitter profile.

It is believed he is considering an admission because he wants to resume his athletic career, and has shown an interest in competing in triathlons.

Asked whether the American was set to come clean, his lawyer, Tim Herman, told the New York Times: "Lance has to speak for himself on that".

The newspaper claimed Armstrong had met with Usada chief executive Ty Tygart - who called for the Texan to tell the truth last month - although Herman denied a meeting had taken place.

The paper also also said Armstrong is seeking to meet with David Howman, the director general of the World Anti-Doping Agency.

Howman said in a statement the agency had read "with interest" media accounts of Armstrong's possible intention to confess.

"To date, Wada has had no official approach from Mr. Armstrong or his legal representatives, but - as with anyone involved in anti-doping violations - it would welcome any discussion that helps in the fight against doping in sport," Howman said.