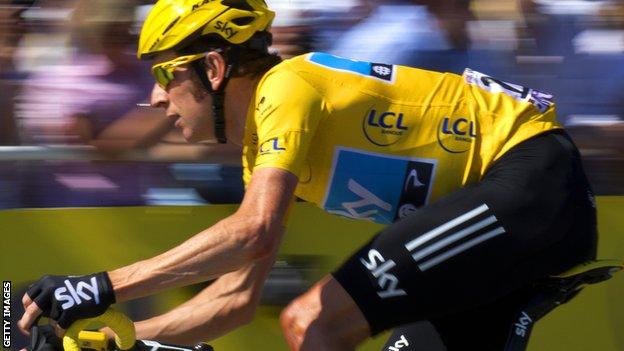 Bradley Wiggins will lead Team Sky at next year's Tour de France if that is what he wants, says former British cyclist Victoria Pendleton.

But Wiggins told the BBC on Thursday that he wants to defend his title.

"There's not many things Bradley has set his mind on and not achieved," Pendleton told BBC 5 live's BeSpoke.

In July, Wiggins, 32, became the first Brit to win the Tour de France while Froome, in a supporting role, was second in the overall standings.

The two were then in competition at London 2012 where Froome picked up bronze in the men's time trial as Wiggins won gold.

And Pendleton says that the pair will continue to battle against each other in the coming months.

"At the end of the day the legs will do the talking in the final stages and when the team is decided," she said.

Team GB and Team Sky rely heavily on the use of performance statistics to get the best out of their riders, a technique championed by Brailsford. This led to Jason Kenny being picked for the individual sprint at the 2012 Olympics ahead of defending champion Sir Chris Hoy.

And Pendleton believes that statistics will play a big part in determining the lead rider for the Tour.

"It will be a scientific decision more than anything else. It won't be based on the popularity of the rider in any way," she said.

Wiggins said that Team Sky could have "two leaders", appearing to suggest that the ambitions of both riders could be accommodated.

But Pendleton says that the relationship between the two shouldn't be affected by the situation.

"It's sometimes easy to put someone at arm's length if you're competing against them head-to-head," she said.

"But you know the decision will be made based on your physical performance, how your training has worked over the season and your general health and condition so you don't have to worry about any of that.

"You just have to work on your own personal performance and your training."